Do you ever get that feeling that perhaps you edited your pictures a wee bit too much in the attempt to have them look exactly like you saw what you were "seeing"
I think I have fallen into that trap .. maybe it is cabin fever setting in already ?
Way too early for THAT yet ! 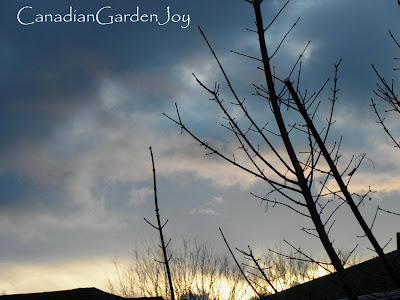 It was a dark and stormy day ......
Not really .. we did have a patch of weirdness though .. an intense snow squall, then it disappeared as if it had never happened ... 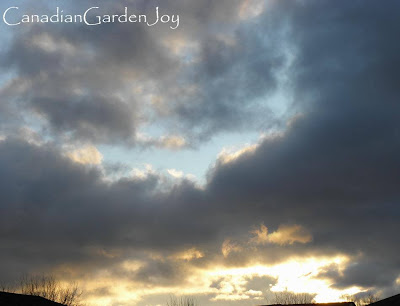 Mean while back at the ranch ..
There was this amazing patch of very dark cloud before the snow flew ..
You can see an almost prismatic affect in the clouds from , dare I say snow crystals?
I have next to almost no science back ground to verify this .. I am going on a wild Canuck hunch!
If you enlarge the picture you will see it below my watermark. Go on .. Do it !! 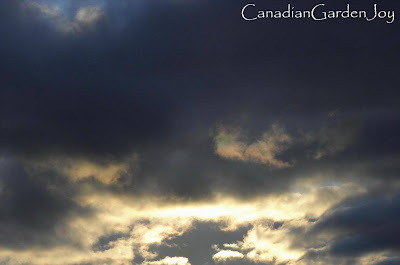 This next shot .. well .. it just had to happen .. the contrast of near black and white was amazing!
The small twigs look like fingers reaching out .. this could very well have been a Halloween moment for me ? ;-) 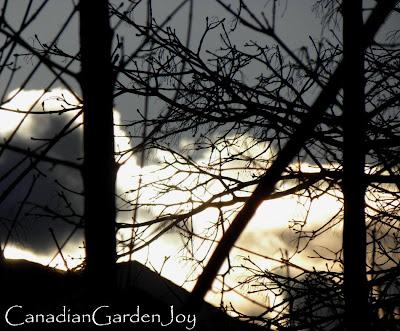 Now i have to admit before the snow flew .. my poor curly juncus was already frozen in its pot .. I have no idea if it will survive now .. fingers crossed ? 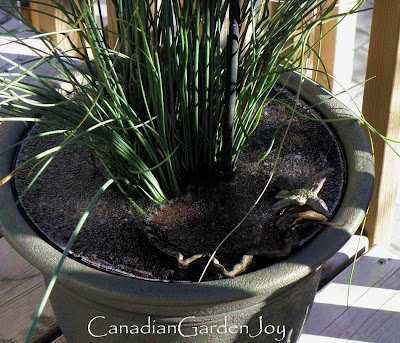 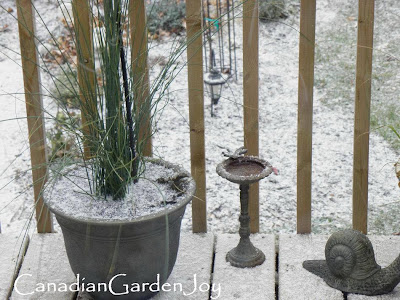 This is for Cindee .. when she sent me Mista G a couple of years ago we both wondered if he could adapt to the Canadian way of life after living in California ...
Cindee .. he made it !
He is a Canadian Gargoyle EH !! 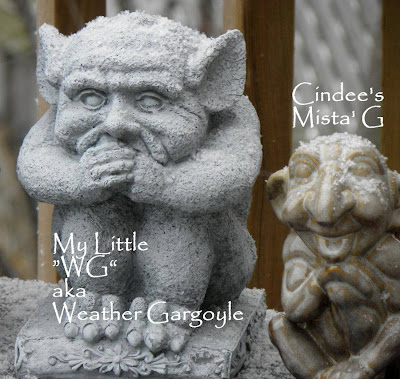 My WG is very happy for the company .. because we all know Dave is constantly complaining about his crack .. and "Thinking Gargoyle to the right" well ... he thinks and doesn't talk.
So now the crew is ready for ... winter !
Posted by CanadianGardenJoy at Sunday, November 28, 2010

Super-Beautiful post and always a such a fun-spirited and intersting read..you have a way with words and wit! Fabulous photos..and I love your gargoyles and statues of course.

And thanks for your super awesome comments on the hollyhock post..so nice to read how it brought back memories for you! yay!Thanks for sharing that!

have a fabulous week!
Kiki~

Hello Kiki girl : )
Thank you so much !Yo are very welcome too .. some times it takes me for ever to get around to blog reading .. I don't know why that is but it makes me feel neglectful ? I think we all say that don't we ? haha
Have a great week too .. fingers crossed no winter storm warnings eh?!

Joy, we have had nothing that you would call snow yet. Lots of sun today and 46 degrees. Maybe I can stick my bows in the outdoor arrangements that were frozen.

Our skies are just gray or black, nothing like yours.

Lovely atmospheric shots! There weren't any patterns like that here - the sky was very clear with only a few scattered clouds at sunset.

(Sorry you can't access the comments - I have software that registers where people who look at my blog are from and it IS showing when you visit. I also just fiddled around with the format, which I doubt will make any difference, but it might be worth trying again.)

Hi Joy! I think your garden snail is trying to run away from the snow hehe! We have it in buckets here now, so as a good Canadian I will make the best of it! :)

Hiii(-:
Love your new blog!!!(-: Everything looks Frosty and Wintery!!!(-: It is cold here lately too. I am not loving it to much either. I must stay inside and warm(-: I really am going to get back into blogging soon.(-: I think I have had enough time off...lol(-:
Seems like time just flies by and I have no energy to do anything but play farmville...(-:
I do want to build a new pathway with rocks but the rocks I am going to get are not to heavy and big. I will do it slow though out the winter and by next Spring it will be all done(-:
Give Mista G a hug from me!!!(-:
Well I gotta get some Zzzzz's hope you have a great day tomorrow!!!!

Eileen girl .. the weather is menopausal here .. from one moment to the next it CHANGES ! BUT ... not having been dumped upon by snow yet seems to make the winter not as long .. well .. maybe ? ..by January it won't matter because I will have full blown cabin fever !
I am still in love with your gorgeous arrangements girl .. wish you could come over and do some for me ? LOL

RPS77 .. OK .. this is just TOO funny .. I was "allowed" to make a single comment on your last post, then when I tried to make a comment on the post below it ? It was like it recognized me and wouldn't let me in again !! Now how is that for sneaky ? haha
I have noticed that your comments aren't coming over to my gmail.. any comments I "allow" show up in my gmail as well,yours haven't shown up though, so that is indicative of a problem some where .. I wonder what on earth is going on !!

Ms S .. VERY soon I have a feeling that we will be keeping company with you on that snow account ?;-)
We have just been too lucky ? it is coming .. eeekk !
Yes ! Snail always thinks the "grass" is greener some where else .. then gives up and comes HOME : )

Cindee girl : )
I think you need a "Farmville" HELP support group ? hahaha .. Hey I know what you mean .. some things just become an obsession and why not if you are relaxed and having a good time ? Don't force yourself to get into blogging until you are really ready to enjoy it : )
Mista G is really having a good time here .. but I am looking for those tiny scarfs for the boys .. and heaven knows Dave is still complaining ! hehehe

Gorgeous shots as always Joy. Your little friends look a bit cold to me. Brrr.... lol ;)

Sorry about the problems - I wish I knew what was wrong. For the time being I guess we'll just have to communicate as best we can!

Thank you Racquel : ) .. it is getting a wee bit COLD out there .. I am looking for some tiny scarves and gloves for the boys now ! wink wink

RPS77 ... Please don't apologize !
It is rather funny .. I am thinking some little cyber "CSI" is guarding your blog from my comments .. I am on "wanted" posters in their little smoke filled offices .. they grumble at me as they drink really strong coffee and smoke cigars;-)

Nah, you don't edit too much. Or else, I am seeing the same things you see. We did have a squall on Saturday, though. Our close are we??

Sandy I was just over to your place and saw those cute little birds .. I can never get good pictures of birds, they are just too quick for me !

You take amazing sky photos Joy ~ I don't know if you tweak them like crazy or not but they're really terrific. I hardly have time anymore to play with my photos. I'm lucky to get them uploaded and posted!
It's starting to look pretty frosty there.

btw, did you change your blog name??? It looks different ~ I know I'm not as "regular" here as I want but seems like something is different??? maybe I'm crazy?!!!

Hello Kathleen girl !
Actually I don't tweak very much other than zooming in and adjusting bright light to tone it down a bit .. but I am always conscious about trying to keep it as original as possible : )
Hey .. I understand about the time slipping by so fast even when you want to do other things and simply can't.
You are NOT crazy girl ;-)
I did change my name and I have been playing with background designs etc .. I find it easier now .. I am not so petrified with attempting to try something different ? hehe

snow is coming i guess:) it will be marvelous garden under the snow as well...

Hello beste and yes ! after this rain episode snow will be the next weather event for us .. but we have been lucky to delay it until now ;-) and yes .. the garden will rest under the snow : )