I was sure I heard robins a couple of days ago .. but cabin fever can make you hear .. well, strange things .. like raccoons in your attic, just because you had two years running with RACCOONS in YOUR ATTIC !!
OK ... I feel better getting that off my chest .. now for the "Robinator" being back in town ..
I was standing on the deck in my questionable nightwear yet again .. taking pictures of clouds .. and Robinator flew in to snack on the berries left on my beloved Sumac !
I had to take a gazzillion pictures because poor camera couldn't focus with wind whipping everything around .. but I managed a few pictures depicting ? a real robin !
So this is the official report on the 2nd of March as "Robin Spotted Day" : ) 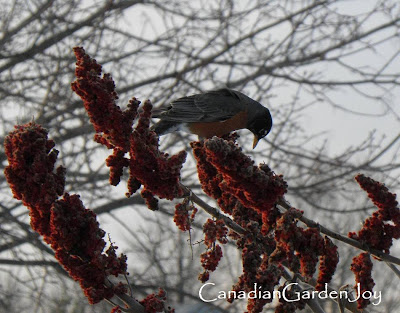 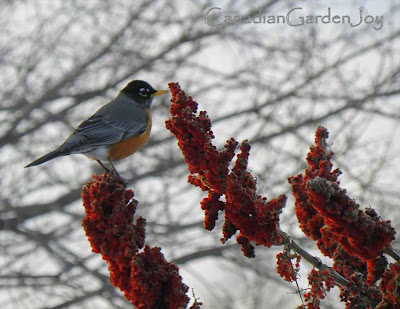 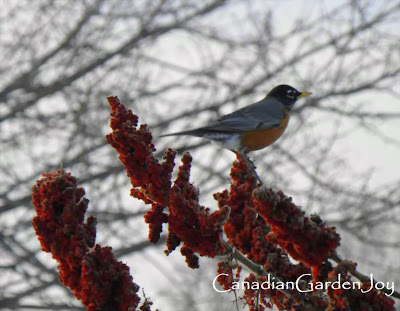 I think he was getting fed up with me taking pictures so he gave me his back, but with a beady eye still fixed on me in my fuzzy and very PINK housecoat .. maybe he doesn't like pink ? 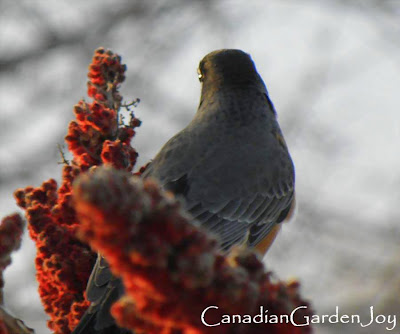 Clouds are whipping by as if they were catapulted through a sling-shot .. I caught some sun rays trying to escape ! 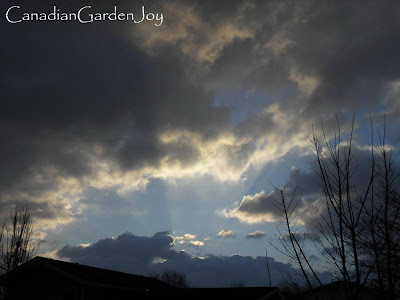 I found my new watering can at Costco .. copper like finish with brass rose head ? shower head ? what ever the part with the tiny holes that make for gentle watering is called !
So ..... things are getting "gardeny" here .. the Kingston Garden Festival starts on Friday .. I'm hoping for a few great pictures to post : ) it is a small display compared to the BIG city ones .. but it is so nice to see and smell those forced Spring bulbs ! 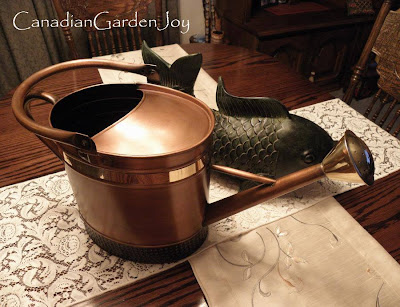 Posted by CanadianGardenJoy at Wednesday, March 02, 2011

How exciting to see the first robins, Joy! I saw some here a few weeks ago, but haven't seen any since. Not sure if they were scared off by the snowstorm that came soon after or by my ratty blue bathrobe:)

Hang in there, Joy; spring can't be too far away. Love that copper watering can!

I knew it! I knew it! A couple of days ago, I could have sworn I heard robins singing while I was in front of my computer early in the morning. I guess it wasn't cabin fever, after all :)

Yahoo, that means spring is on its way! I'm getting more and more excited as every day goes by. Can't wait till the garden centers open up! Can't wait to get started on the gazillion outdoor plans I have in mind.

I have no doubt you're just as eager as I am to step out into the garden.

Hello there Rose girl : )Thank you!
LOL ! love hearing someone else has ratty night wear ? .. I'm sure they just hid out due to the bad weather .. I can't believe they are around here with our rough stuff going on. I was too happy to get this watering can for the deck .. I always manage to break the plastic ones some how!

Hello Martha girl .. I had heard them quite a while ago but didn't actually see any .. so this was a huge treat ! Good grief YES !! I have lots on the to do list for the garden .. now whether it will get done is another issue all together ??? LOL

The Robin looks so pretty setting on your Sumac. You are getting in a gardening mood with more gardening goodies. Have fun at the Festival Joy.

Your robin is a handsome fellow, Joy! Maybe there's still hope for a Spring, you s'pose? ;) I adore your watering can...we bought my Mom one similar to it but she refuses to use it outside and has a dried flower arrangement in it. :-?

I haven't seen on yet. What a nice poser your visitor was!

Your new look is classy.

Hey Lona girl thank you ! and I was so surprised when the robin just flew in like that and started eating .. a rare opportunity I grabbed : ) Yes ! even though we know our Spring is going to be late I can't hold back on the garden bug ! hehehe

My goodness Nancy girl that is too cute of your mom using it for that but hey, it is so pretty I don't blame her .. permanent gardening reminder right there for her tolook at ? : ) I was so happy to finally see the robin that I think he thinks he owns us ? that is why I call them a robinator ! LOL

Well Sandy girl thank you ! Wait for the silly side when St. Paddy's Day rolls in ;-) I have to be full of clover and tacky then!LOL ..

Joy, I think tears welled in my eyes when I saw your brave little robin. I must be getting a little crazy for signs of spring! lol Nights are still in the -30Cs here so I hope the robins are staying well away until it warms up.

I think we GWN gardeners need to collectively send Mother Nature a vibe telling her to hurry up! She is spending far too much time sipping pina coladas somewhere tropical when she should be hurrying back here.

Love your watering can - nice!

Lucky you, seeing your first robin.

Ms S girl ! We do get emotional when nature teases us with signs of Spring .. and I too thought holy crap this guy must find it freezing still ! BUT .. there was so much "bird food" last Fall that I still have a lot of sumac berries whch means a source of food for them thankfully !
I knew I heard them days ago and now to catch one like this was perfect ! YES !! mom nature get going already !!! LOL

Linda it all happened by pure luck so YES .. I was LUCKY girl ! hehe