Mooning You and other Day Lilies ? 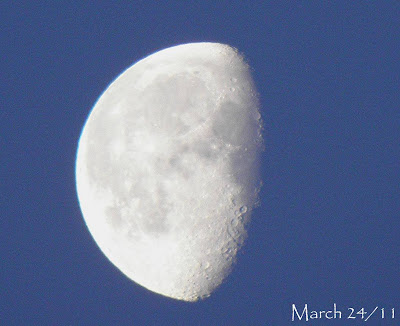 I'm not sure what the extra dark areas are, other than it was me trying to bring up the relief detail as much as I can and causing a jpeg melt down ? but look at all of those "pot holes" !!
You wouldn't catch me driving on a surface like that .. although driving on some of Kingston's roads might just compete with it ! 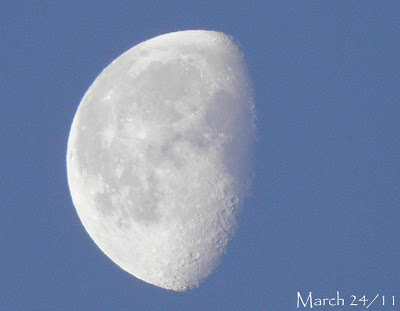 OK .. I know .. what the heck is she adding to her Spring madness now ? ..
It is a long story but I will make it short .. Costco made me DO IT ... this was the only package I could see with these two reblooming day lily in it .. 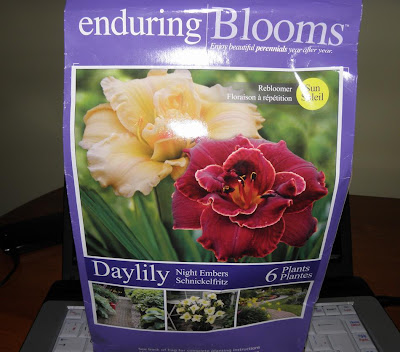 I had seen info on Night Embers before and admittedly .. I have admired it for some time .. ergo the possibility of picking it up some where, was going to happen anyways ?

But this other one that I can't even pronounce ? "Schnickelfritz ?? who is able to say that with a straight face ? .. it is also a beauty even if I can't say its name .. I'll just call it 'Fritz' for now on .. So yes, more additions and I haven't even gotten the garden clean up done yet because our weather has been down right UGLY .. cold and snow predicted for tomorrow .. I really wonder if there will be a Spring .. honestly even a Canuck can have enough of the GWN by now !!

Posted by CanadianGardenJoy at Thursday, March 24, 2011

Fritz- I like it! Much easier. They sure are beautiful- I love day lilies and need to focus on getting some in our new beds- I keep telling myself, one bed at a time! There are so many beds though...and their pretty much empty! And you know how I feel about 'foreign' flowers- I just won't have store bought in my house :)

Your moon shots are always so beautiful!

Those 'pothole' are in the image. I have an unretouched photo with them and I was wondering about them too. I never noticed them so prominently before. This really was a special moon.

I couldn't say that name without smiling. :)

Joy:
If you haven't had it yet.... we got lambasted with close to 8 inches of snow yesterday. Windy, blowy and downright not he entrance into Spring that I was anticipating, so your recent expedition, it'll help keep you sane when the snow starts to fall. I hate the be the harbinger of this bad news but someone has to prepare you!

Tessa girl I don't think "he/she" will mind the nick name Fritz right ? haha
Now keep calm .. you will fill those beds up eventually .. you really just moved there and how on earth can you fill those beds that quickly girl ! Just breath and take things slowly .. it will be perfect and you will have your own flowers : )

Thank you Cat : ) I am amazed myself with what my camera can pull out of the sky !

Donna isn't it stunning how pitted the moon is and that we can get those kind of shots to see them all with ? I swear there are so many more impact craters than ever before !!

Ms S girl : ) names can be a real hoot for some plants can't they ? I mean what were they thinking when they tag this lily with that name .. too funny !

OMG Barry .. we saw it on Global news and I have a friend in Oakville that wrote about it .. so far we have escaped it because it is keeping south of us .. but I thought of YOU when I found out about it all .. where the hell is SPRING ????
PS I was watching 'Absolutely Fabulous" last night .. the one about Eddie's boyfriend with the "Lost Beatle Tapes" OMG too funny yet again !

We have the same photo of the moon ... snap!

Hey Linda girl I was just over to your place to spy on your moon pictures : ) they are great and just like mine ! too funny eh ?
I see i might get one more chance this morning too so I better be ready ! haha

I like your new template and the header is great. Imissed the big moon due to cloudy conditions. Boooo. The people who name the daylilies don't care if people remember the names or they would give them pronouncable names. Have a great weekend.

Hi, Joy! It's been awhile since I've had time to visit; I knew you would be taking advantage of the beautiful moon we've had the past few weeks. I wouldn't have been able to pass up those daylilies, either; they just seem to fall into my cart whenever I go plant shopping:) And I'm a sucker for their names as well as their color--'Schnickelfritz' would add a little comic relief to my collection of poetic lilies.

Thank you Lisa girl : ) I missed that super moon too so I am taking advantage of our morning moons of late.
I like swapping it out more often now.. until I am too busy in the garden ? LOL .. I think you are right about the naming of a lot of plants .. they do get silly at times !

Rose girl I have to get over to your place too .. a lot has been going on here .. another reno from hell .. this house has a reno curse !! haha
The morning moons have been great lately so I am grabbing them while I can : ) and YES !! comic relief from some of these plant names is perfect Rose .. we can't help but have a laugh from it all ? ;-)

Thanks Karen and I love your blue sky through the tree shot along with the sugar bush ! I amcraving maple candy now !! LOL

You and I are on the same track Joy! About two weeks ago, shopping at Costco, I couldn't pass up the bag of Orienpet Lilies, eighteen of them!

Needless to say, I haven't been able to put them in the ground yet because it turned cold and snowy. I don't even know where I am going to put them.

Eileen girl I think we are suffering from gardener's winter rage ? we are so fed up on this weather we just keep buying plants even though we know we have so little space it is getting scary?
I just couldn't resist these and I swear the woman behind me looking was actually waiting for me to put down the bag so she could grab it!LOL .. phew !! hahaha

Great shots of the moon. I sleep in so I miss all the fun.
Love those lilies. Just set out three that I purchased last Fall. I know I should have planted them already. Had to make up my mind where I wanted them. Of course in my Rose Garden. It is fairly new & I'm trying to get some plants in it. Of course I may move them later. lol

Hi There Lola ! .. My girls make sure i get up before the crack of dawn by pounding on the door with their little kitty paws ;-( hehe
The moon has been great in the mornings lately so I just snap away! .. hey I know what you are talking about .. our plants should have training wheels on them until we make up our minds where they look best ! haha

Hello - just coming to look at your great pics from sunrise, moon and your beautiful garden. Here spring starts to bring all this colours - we missed all the time - back. You have a wonderful blog.
Wuff and LG
Aiko

My goodness thank you very : )
Spring has been such a tease here and this waiting for her to make her mind up .. well it is a good thing I can take pictures of other things besides my garden while it is sleeping ! Thank you for stopping by : )

Hi Joy, you had to know, that I´m very surprise to get a reaction from Canada and than from Kinsgston. It´s the dreamcountry of my both humans. They stay for some years on the St. Lawrence river in Ivy Lea in the summertime and the marina of Kingston was often a overnight stop and for shoppingtours - lunch - and supper....
So Canada and many wonderful boaters are becoming close friends and Ontario is like a second home.
My "Mummy" loves gardening and the sky with all his colours - changing from morning to evening.
So long
Wuff and LG
Aiko

Wuff and LG : ) Hello again ! That is amazing ! You know Kingston : ) It can be quite the tourist stop but especially for boaters so that connection here is special (even though I am not a boater .. but husband is with his fishing boat: )
I grew up in my teenage years in Ottawa .. and we have lived many times with army postings here and now retired .. so I love "meeting" internationals that know of our little city : )
I love your mom's pictures and I want to visit again soon !
That series of the sun was totally awesome !!