A brilliant spot of sun in your garden !

A spot of sunshine glowing against black mulch is a sight I love to see on these many gray days we are having in between the rain (I'm trying not to complain about the rain .. saves my epic battles with the hose which hates me .. naughty hose !)
Hypericum calycinum "Brigadoon" .. you can't get much more of a sun spot in a plant than this one .. in fact it might turn some gardeners off .. could be considered garish perhaps ?
But as the saying goes "the heart wants .. what the heart wants" or something like that ? 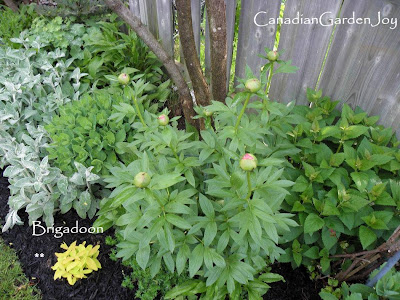 It stands alone on its vibrant colourful plant legs .. sort of a "LOOK at me" stance right ? 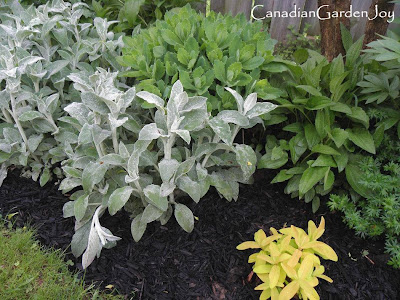 It isn't too "busy" right now .. foliage is forefront, grays and greens the surroundings for now .. the flowers will come later .. so this very YELLOW plant is shining against my favorite black mulch .. did I say how much I love black mulch ? .. Yes .. I know .. it will lighten to a gray eventually .. but I still love it ! Don't mess with my mulch ! 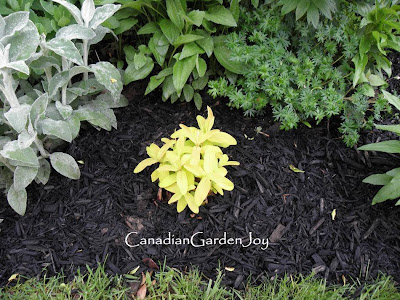 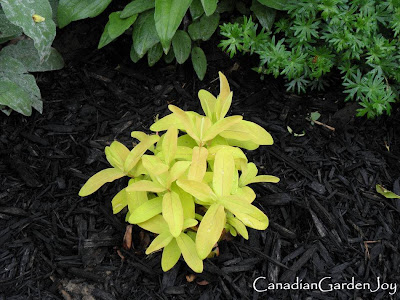 The flower to this plant is almost unbelievable .. so much so it looks fake !
I can say that because I saw one of these flower, in a garden center, and I swear .. I had to touch it .. practically maul it to make sure it was REAL !
Normally I would not go for a plant that has that feature but some how I became enamored with this little guy and had to bring him home to my assortment of plants that make my clock tick ! 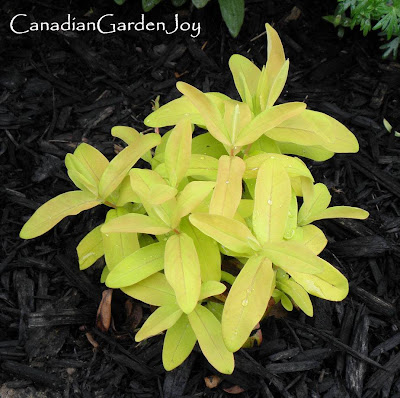 If you have a chance to see this in a garden center in bloom .. poke the flowers like I did (when no one is watching of course) because they do look fake ! .. makes me laugh even now .. if some one had caught me last year going "poke ... poke .. MAUL !" OOPS !! wink wink
Posted by CanadianGardenJoy at Friday, May 27, 2011

You always bring a smile... but now I'm dying to see a blossom of that sunny little plant.

Please do share photos when it blooms...I love the foliage.

Oh Joy I love that one. What a stand out it is in that bed.Looks so lovely there.
I always have to touch everything too. I am worse than some kid. LOL! One day in Walmart I was running my hand over some foliage plants and then I scratched my neck. Well my hand and neck started burning and itching like crazy. I ran to the restroom to wash them off put it still burned like crazy for quite some time.I had touched so many I did not know which one caused the reaction. LOL! I am the girl who does not get poison ivy or oak so this really threw me for a loop. Do you think that stopped me from touching all of the plants? Not! LOL!

Mmm, don't you love all those clumps of fresh spring growth! Your peony buds are about like mine - still waiting to pop open. A weekend of cool temps and rain won't help, maybe next week they'll open . . . .

Hello there Carolyn and thank you girl : ) You won't believe the elaborate flowers this little golden jewel puts out ! I will post them as soon as they pop their little heads out ;-)

Darla girl flower smiles to follow forth with as soon as our monsoons stop and we get some sun to make this little golden girl grin : )

Lona girl it really stands out against black mulch eh ?
OMG .. I am so afraid of doing that to my eyes .. bad enough on your skin and not knowing which plant was the culprit !! I can't help myself either .. I touch everything .. we just have to don't we ? haha

VW girl we are having or sharing ? the same weather .. it can swing so dramatically here it can make you dizzy ! June starts next week for heaven sakes and look where we are in plant development for this time of year ! eeekkkk ! The ants don't care though .. they are still having fun !

Grace girl we are all a bunch of ticking clocks aren't we ? hehehe

I've started looking for brighter plants for my garden, maybe it's all the gray skies and rain. I just put in a golden cypress and a white climbing rose.

I like Winston's view of the garden. This plant does stand out. I will watch for it.

Oh my what a lovely one. I must see if it will take to this part of the country.
Love that black mulch but here it wouldn't take long it would look old & gray like all mulch does here.
Reading back a few about grasses. I love them but for some reason I lost a lot of them. One was 3 yrs old & bloomed great last Fall. Karley Rose doing good tho.
I sure like your header shot. It's gorgeous.

Glad you love the redbuds... funny you should mention Flame Maple... I planted five in my gardens. Yea, another one of my favorites.

Bonnie isn't it crazy how much the weather affects our choices for colour in the garden especially now with all these gray rainy days !
I love white roses .. I bet that will look gorgeous and the golden cypress will be beautiful too !

Lisa girl Winston said "enough !" You need to put me on a header so people will remember who is top gargoyle in this garden ! LOL

Thank you Lola girl : ) .. yes this mulch will eventually turn gray too but even gray is a good neutral background for plants I find .. grasses .. they can be very temperamental .. I thought I lost my Karly Rose for a while but now I see some green shoots coming out finally .. phew ! I would love to see some sun again soon ? eekkk !

Carolyn girl : ) isn't that funny ? I was very restricted to choice for a tree last year .. I had a long list that was very edited to the one and only I could find which was Ms Flame .. she is a beauty but oh .. if I could only squeeze more in!! .. trees give us so much character in the garden .. wish I could see yours in person ;-)