The count  ... the FINAL count .. as far as I know is 406 ... how it got up there is a mystery to me but there it is !
The most I have ever prepped my garden for winter and planted so many bulbs.
I don't know what came over me ... it just all happened in dribs and drabs but I so hope it looks like it does in my imagination to real life ?
Gardeners do that don't they ? ... use their imagination so much of the time to see the future in their gardens.

Right now it is rather dull and boring and the gardens want to go to sleep .. how can I blame them? 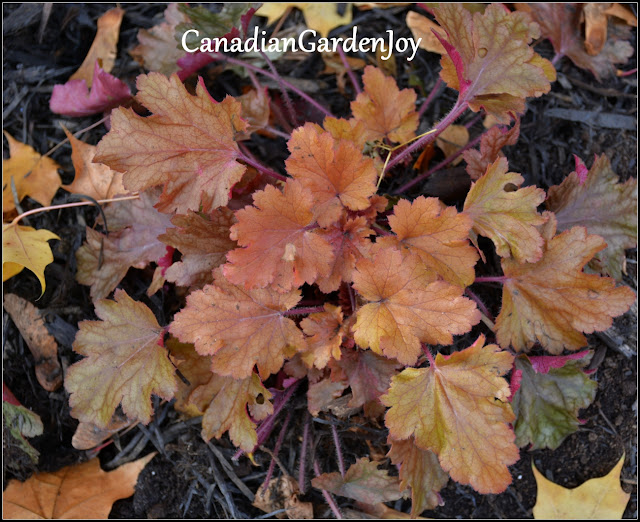 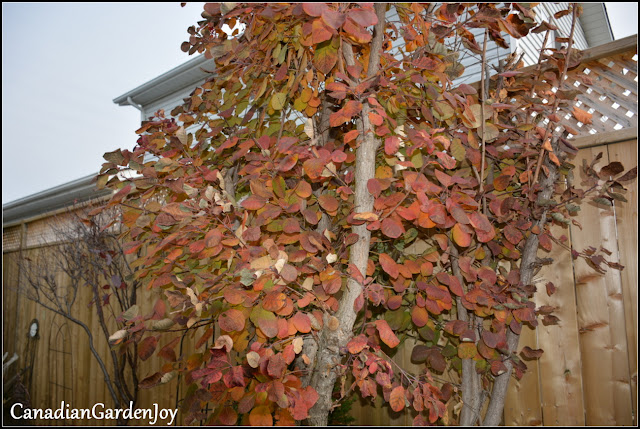 I have two Autumn ferns that I am trying to yet again over winter ... they are very persnickety and I know I should be resolved that they will probably not return but I hold on to hope still. 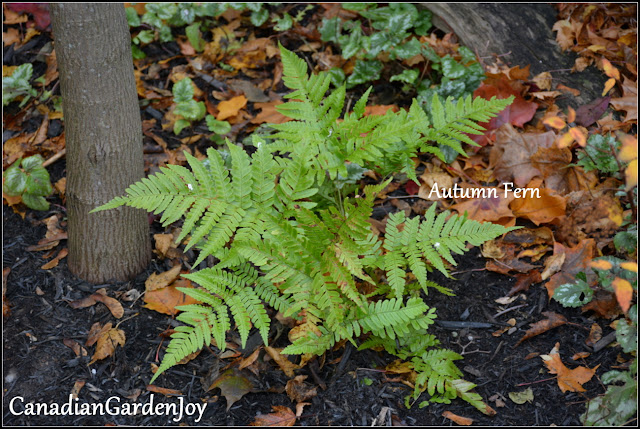 Another oddly green plant is my Red Majestic corkscrew .. it refuses to drop it's leaves yet which said leaves refuse to let down their green guard still as well. 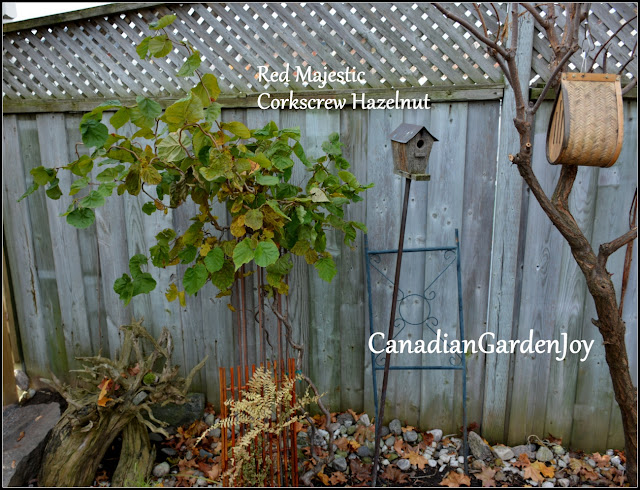 The Maiden Hair fern below looks like a ghost of itself. 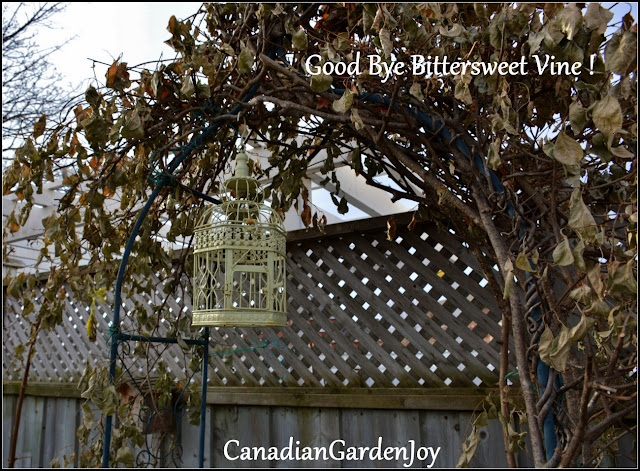 I am trying to make gardening easier for next year so the Bittersweet vine just had to be done away with .. but the skeleton is very useful for the clematis that I will be planting there, as structure to hold on to .. so it has a use even in it's demise .. but oh those roots are going to be hard to get rid of! 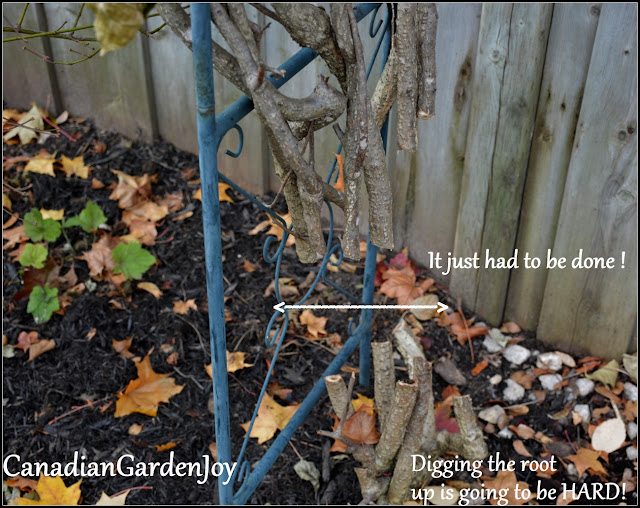 The long bare look of the pathway from the gate .... BIG sigh ! 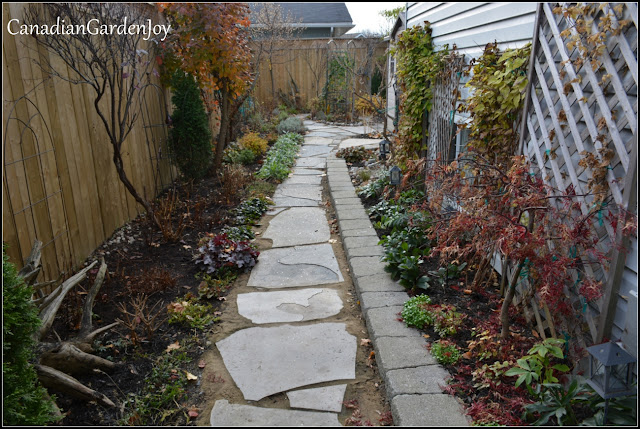 The water feature area is bare as well .. but bits of greenery pop with the little cedar trees and the false cypress shrubs on either side of the Japanese maple.
Something to see as green through the long winter ! 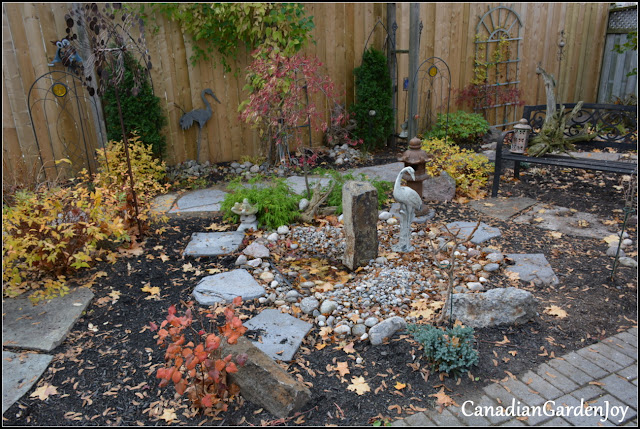 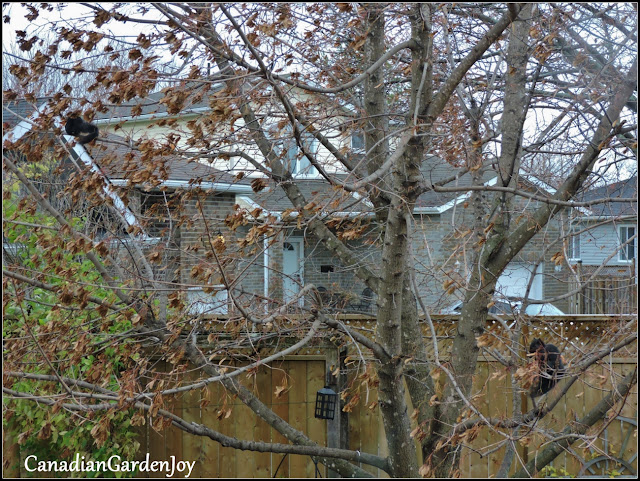 It was a windy day when I took these pictures of the squirrels hanging on to our tree. 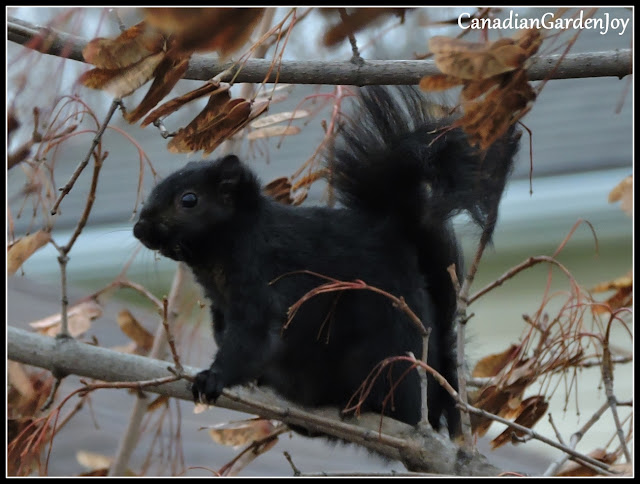 I could not help but name this guy" wart-face" .. could you ?
They do a helpful thing by eating those darn wing-nut seeds from our maple .. other wise we would be knee deep in them !
Lately they have been frantic about eating and storing them .. does that mean our hard harsh winter is breathing down our necks soon ? eeeekkkkk ! 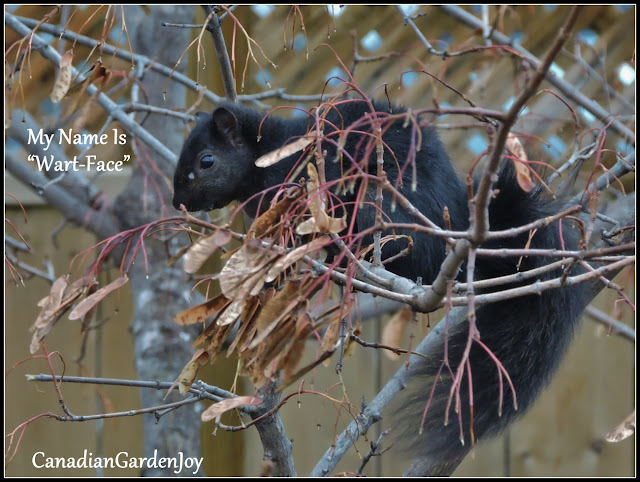 Well the majority of the list has been stroked off ... I can breath a little easier and wonder what will happen in the Spring ... that has to keep me going !
Posted by CanadianGardenJoy at Tuesday, November 17, 2015

Your garden looks great for this time of year. I can't believe you planted so many bulbs. I got stuck just planting a measly 60. But my imagination will probably see many more next spring. ha... Enjoy this weather as long as it lasts.

You had a nice long Fall season. Its amazing how everything goes so fast isn't it? I love the squirrel. We don't have the black squirrels here, but I have seen an albino.

It must feel good to have all of your bulbs planted and your garden ready for winter. Wart Face is a cutie! We don't have black squirrels here so he looks very exotic to me. Yikes, winter seems to be breathing down our necks and I'm ready for spring now.

I have had difficulty keeping Autumn ferns alive over winter too. Strange as they are definitely in our zone. I mulched mine as well since they were new. Did not help.

I don't think I've ever seen your garden in its late fall coat, with faded colors and bare spots. Isn't it sad? But those 406 bulbs will perk things up a bit come spring, right?

Hello Lisa : )
It has been very dry but we did have some rain yesterday .. I can't believe I planted that many bulbs myself girl ! LOL ... I wonder if they will all come up right and look good in the Spring though ... hey you did GOOD ! ...

Cindee that boat garden is amazing ! I would be |playing" there a lot figuring out what plants look good as seaside plants .. you have a whole different aspect to work with now.
Yes our squirrels can be a hoot .. they are cleaning up the maple tree for us : )

Thanks Peter .. the last ones were sort of shoved in the ground so I hope they don't hate me and look weird in the Spring ? haha The weather is truly strange this Fall... winter is coming but when and how bad is another thing altogether ?

Patty ! have you given up blogging ? I'm glad to see you here : )
Isn't it strange about Autumn ferns ... I'm hoping at least one might make it but I know the odds are against me .. I just have to wait and see but they persist on being GREEN so far!

Robin I don't usually take a lot of pictures during this season, well especially at the tail end when things are so cleaned up and looking bare .. but like you siad all those bulbs should make an impact come Spring ... well ... fingers crossed they do!

406 bulbs! Won't you have a terrific display come spring! I am going to be sorry, because in the end, I have planted very few bulbs. I hope you have better luck with an Autumn Fern than I did. I am giving up on them. Have a wonderful Sunday Joy!

Jennifer girl I really hope it does work .. but you know how we gardeners are .. wild imagination that reality has a hard time living up to ? LOL
Yes that Autumn fern is tricky ... this is the second time I am trying to over winter one and with lack of ground snow right now and freezing temps .. it is not a good start.
I loved that snow owl wreath you did girl , it is my favorite !!

406 bulbs?? Wowzers!! That is a lot! Bravo to you for getting them all planted. Why you'd get rid of the bittersweet?

I hope this isn't too late, I'm afraid you might not check two months later! You know how I'm always going to your garden for inspiration, I wanted to ask about one of your posts. It's from May 19, 2015, the 4th picture picture...

"Parts of the garden are becoming a jungle ... some "editing" has to go on to let understory plants have a chance of rain ? and sunshine."

What did you do? Did you just trim some plants, or did you move some? I often wonder how you keep everything so perfect.

Tammy girl ... I went over to your blog and answered your question .. it was a beast !
Leslie girl I sent you an email answering your question : )

That's a gorgeous black squirrel, it really caught my eye. We have just the common brown ones here, although I think they're attractive also. Your garden still looks good to me!

I just found your blog - great photos! Want to tell you something about your Autumn Fern: it is just barely hardy in zone 4 but will do fine once established. It is very late to unfurl in the spring, so give it time. Sometimes it doesn't show until June.

Hello retriever and thank you so much ! Happy New Year to you as well !
Victoria Happy New Year as well .. hope all is going smoothly over there and thank you for stopping by : )
Thanks very much Lis .. yes this Autumn fern is a wee bit stubborn .. but I think more realistic than Autumn Brilliance was in my zone ... so fingers crossed it will come back for me. I have a thing for ferns and have quite a few different ones .. obsessions can be a pain!LOL