Well ... this post is about what I posted almost a year ago and then dropped out of sight.
I am hoping this isn't a prelude to that again, but there is no point in not admitting I am struggling still.
But ? .. onward and upward ? with what this post is actually about !
My wild child peony, Green Lotus , is blooming again and making me happy enough to put some effort into an actual post. 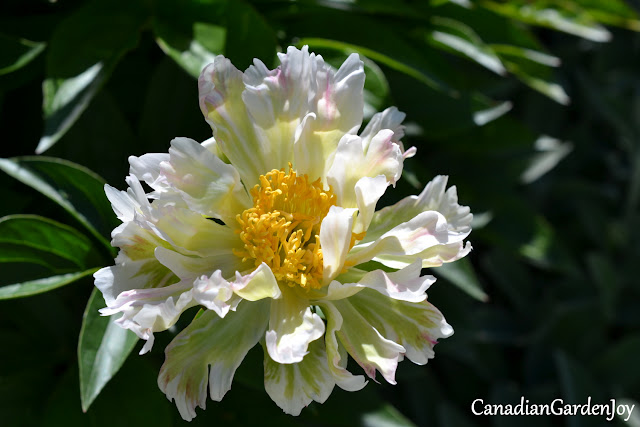 I took a few pictures in shade so the dark background brings out those hits of pink and green in it more than last year's "in the sun" position.
I took it with my Nikon D3100 and a 40 mm lens around 10 AM on the 11th of June.
I want to make an effort of recording exactly what I did so I can actually REMEMBER ? 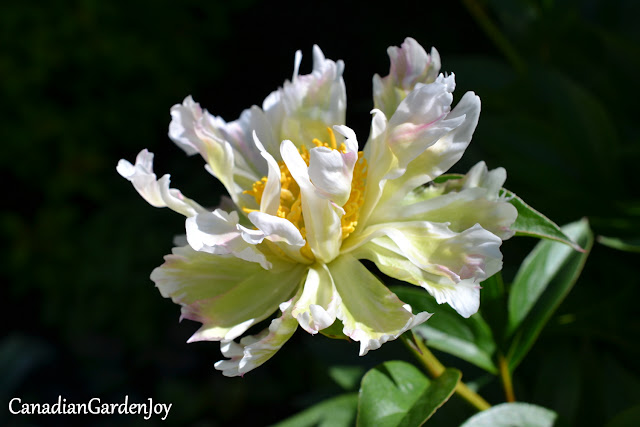 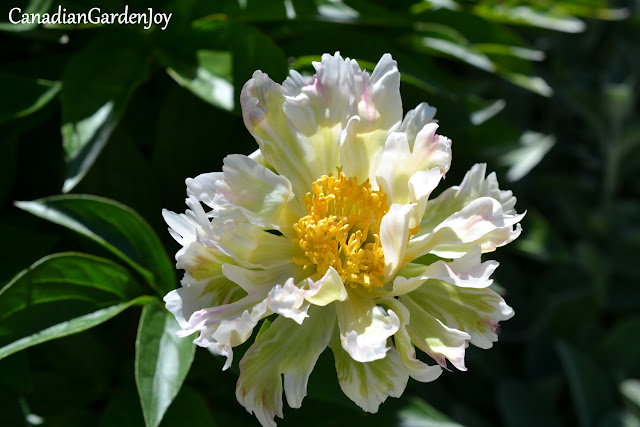 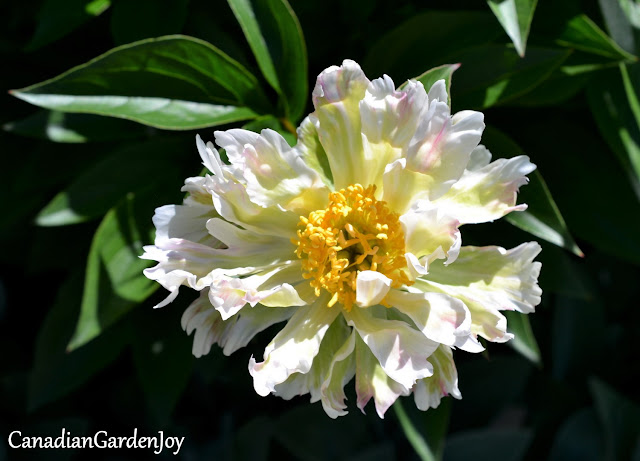 I , or should I say my garden, has taken a lot of "hits" from this past winter and it has been rather discouraging ... from many Japanese maples either dead or half dead (I haven't been able to bring myself to dig those out yet .. some are sprouting from the root stalk .. they want to live ! )
In fact I  have a strange situation of two varieties possibly? growing from the root stalk and the graft.
Has anyone tried to accommodate something like this?
The original was named Emperor 1 .. all red leaves .. am I mistaken as to what is happening?
Any advice would be greatly appreciated ! 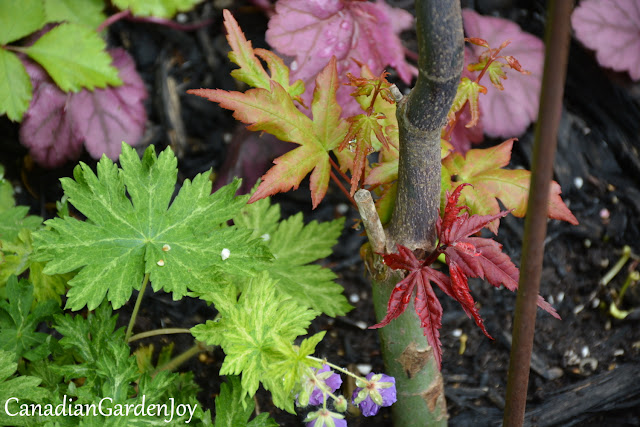 Posted by CanadianGardenJoy at Tuesday, June 12, 2018

That is a beautiful peony! I have the root stock maples. They are doing better then the previous grafted one. I think we had the same one. I actually like the two together(-:

Your 'Green Lotus' peony is gorgeous again this year! Sorry you had so many winter losses this year.

Hello Joy, Brilliant shots of your Peony. Disappointing regarding your Japanese Acers. I have never had this happen, I would be tempted to leave it and have a go at cutting back the part which is reverting as it develops. Mind you I am not so sure if you should listen to me considering the number of plants which I have murdered simply because I have tired of them.
Don't give up on your blogging, many people would miss you.

I am not a fan of green blooms but this peony has enough other color to make the blossom seem like it is supposed to be that color. Great photographs Joy. As to your J Maple I don't have the slightest idea. I haven't had that bad of a die back before to have to deal with this issue. I hope you figure out how to keep the parts of the plant that you want. Both of those little leaves are pretty.

Hello Cindee girl !
Thanks girl : ) .. it is my favorite peony (not that I have many) .. I wish I had access to the plants and trees you do for the prices you pay ! my garden would be a true JUNGLE ? LOL
I just don't know what to do about this whole Japanese maple mess .. I keep waiting to see if I come up with a genius plan ? haha

Hey there Peter lad and thanks ...
I am so happy to be able to count on this plant to look so good .. it just begs to be photographed and of course I oblige ? haha

Alistair you are sweet, thank you !
I'm just not sure what to do .. I think I am going to leave them all until next year to see what is really happening .. at one time (when I was collecting them) the prices weren't so bad .. but now they have become ridiculous .. not sure if this past winter really had anything to do with that .. hey, you aren't the only serial plant killer my friend ! LOL
Thanks very much for the encouragement .. I need to light a fire underneath me to keep on track.

Lisa girl hello there !
Thank you so much ! .. I seemed to be able to get more colour from the shots this year .. the lighting was just right for that I guess ?
I wish I could get a hold of some one that knows what is going on with the JM .. for now I am just going to leave them alone and see what goes on next year .. I can't bring myself to haul them out or severely cut back ... yet ! A wait and see policy for now ?

Woo Hoo you did a post !!! You have to do things at your own pace, other people in good health can work outside all day, 30 minutes here and there is good. I've had shrubs grow from the root stalks but they never look as good as before IMHO, sometimes you just have to wait a year and see what happens. Your peony is a beauty and great capture btw. I have no luck with them...they die in 2 days. Oh, lighting is important for many photos...the right time of day makes a big difference.

Hello Pats girl .. thank you ! .. I remember the old days when I could work hour after hour and it was truly wonderful .. but like you say , now it has to be at another pace and I have to adhere to my own limits (ugh !) LOL
Yes .. I am going to let the JM(s) alone for this year and see what they do next year .. it would break my heart to kick a struggling survivor out of the garden without a proper chance.
Lighting is such a tricky element .. it can be so perfect for just a few minutes then disappear in a snap .. it could drive you mad trying to keep up with that as well ? haha
Thanks for stopping by ;-) 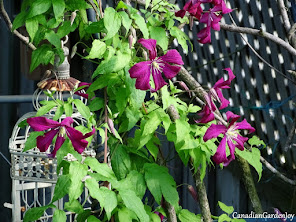 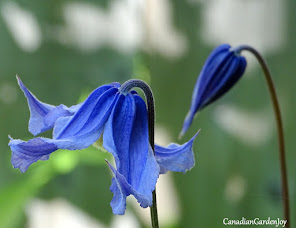 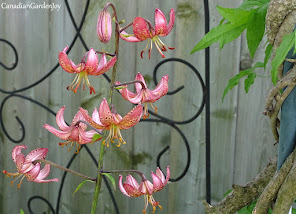 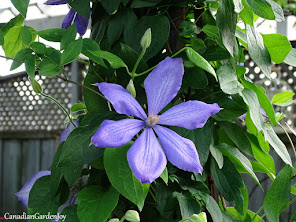 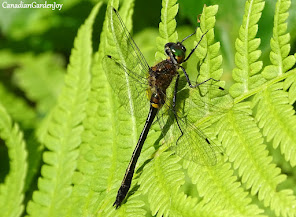 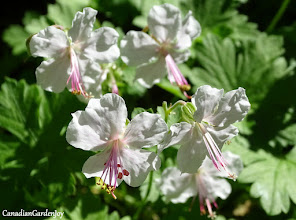