Soft Flowing Garden .. before the HEAT

These pictures are from May 23rd .. I have to play catch up because I have been working so hard in the garden trying to maintain a semblance of order ? HA ! .. it is more like a war on those horrid creatures called aphids .. and jungle heat/humidity that has broken records in Ontario .. Therefore even without rain .. the garden is leaping forward so much and so quickly it is hard to rein it in even with a whip and chair !
There hasn't been dramatic morning skies .. although the clouds have been a bit interesting ? 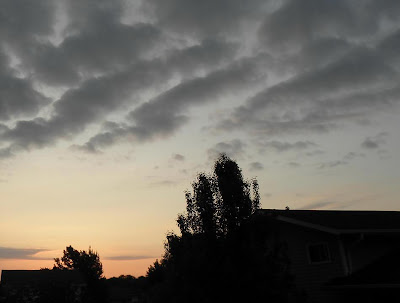 ... and I did catch this sea gull .. ironic eh ? .. we are on a lake and we have sea gulls ?
It does make a beautiful line in the sky though .. you can almost feel that soar he/she? is riding. 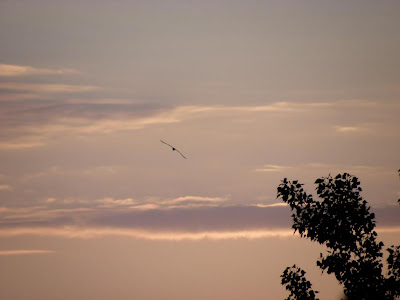 Simple scene with low flowing, almost behaving, plant kids .. and my favorite antique looking ? bird bath that really isn't a bird bath .. a wanna' be bird bath perhaps ?
There is an assortment of heuchera, brunnera, ferns, astilbe, and so on .. I love the mix of it all. 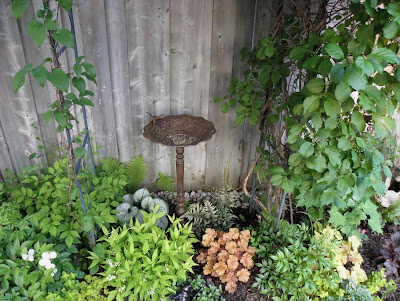 The variegated Solomon's Seal has taken a few years to look this good and I love it to bits ..
I think my Meditation Buddah appreciates the "calm" plantings around him ?
The spiky grass is actually Northern Lights .. I am hoping to see beautiful colours from it this Autumn. I have another Jack frost in this area .. I can't get enough of him ? ;-)
Dale's Strain heuchera is also happy , so far in this group .. along with Japanese forest grass of course ! 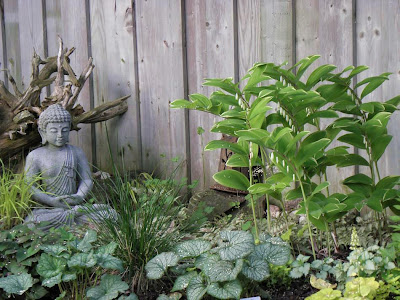 My Bittersweet vine is amazing .. it takes hard work to keep it in order .. but when I was trimming it a couple of days ago .. well the fragrance was awesome ! .. and .. by some stroke of luck with all of the bees around, I did NOT get stung .. for which I am truly grateful : )
The Cotoneaster close to it, is also loaded with opening blooms and anxious bees with other insects .. you have to admit I have a smorgasbord here for them all ? 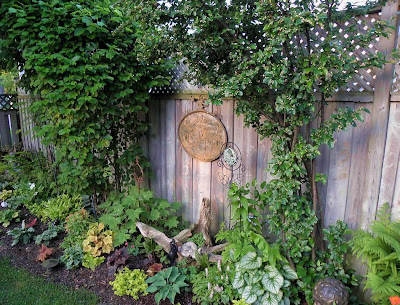 Yes .. the mystery ball is there ;-)
This is Lady in Red fern .. it is held upright by way of a peony hoop .. it gets so large that it will form a waterfall affect and has lovely red stems .. one of my favorite ferns along with the different Japanese Painted ones.
My cat is hidden in the Lady's Mantle .. and again with the Jack Frost .. a beautiful Spirea, a Geum, some baby heuchera .. I finally had to spilt Silver Scrolls but I don't know how well it is coming back .. it was my first love in the heuchera family .. 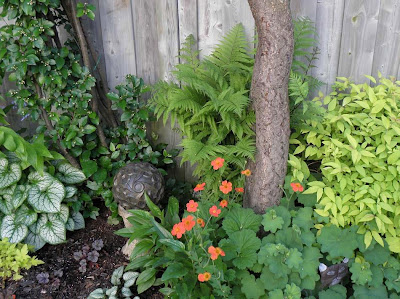 Then just a simple setting of Provence lavender in the long planter and this lovely hosta.
I don't know why I haven't used more perennials on the deck or step .. they are beautiful and you certainly can plant them in the garden come Autumn .. I wonder how my brain manages to work some days ? 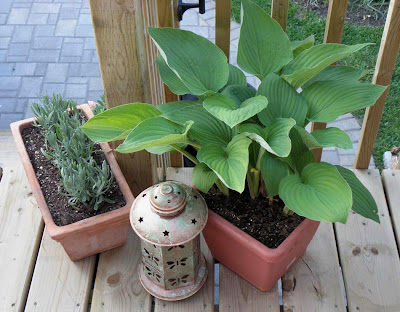 My beloved Halloween Tree aka Stag Horn Sumac is branching out beautifully .. I can almost see those amazing colours in my mind's eye even now ? .. it is only about 156 days until HALLOWEEN !!! 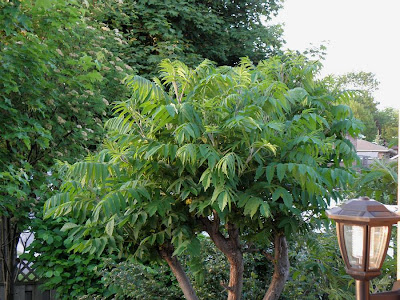 OK .. I have calmed down .. and we can have a chat about garden art now .. well .. about this piece of gorgeous metal .. I found it a few years ago at my favorite garden art store known as Home Sense .. but .. since we are actually getting a LOWES store here in Kingston .. I think there will be more competition for my garden art lust ? wink wink 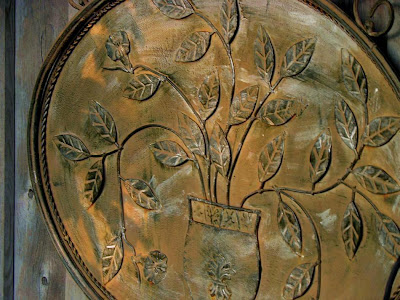 "Pudder" insisted that he should be seen a little more often to reach the status for which the Boys in the Hood and Dave hold (poor Dave .. he is in dire need of plastering his crack .. cross your fingers that he doesn't collapse before I can get to that duty !!) 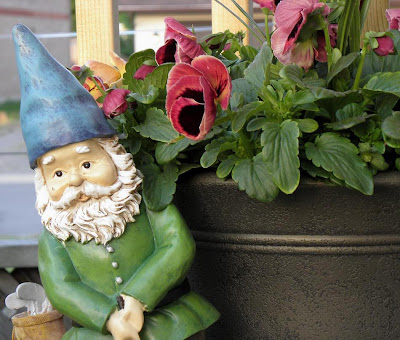 What a soothing garden! Very beautiful!

Beautiful pictures! The yard is looking wonderful as it always does! Humidity is good for the plants right?(-: We are getting a bit of rain here and I am so happy! Can you see me doing the happy dance?(-:
I have been working so hard I am worn out! I need a break!!!!!
You are going to love Lowes!!
We just got two weeping japanese maples for 20 dollars each on clearance! 100.00 trees regular price!(-:
Now where to put them?
I am not going to comment on Daves crack getting plastered. That sounds like a personal problem!! He probably shouldn't talk about it in public....(-:
I will be cracking up now as I wander off into cyberspace....(-:

...you have a beautiful garden, if only mine was more like yours. Gardening is alot of work, but the end result is so worth it.
Have a great day!

Your garden is greening up really nice. Everything is looking lush. Keep counting those days.

I hope that you and Pudder are relaxing with an ice cold drink, if you venture out onto the deck.

I love all of your lovely foliage combinations. Your Heuchera, Brunnera and Solomon's seal look great together. I have what is supposed to be a giant solomon's seal, but so far it is only knee-high. Perhaps it would be considered giant by Pudder.

Great post Joy, you have so much beautiful growth in your garden. Everything looks so lush and happy! What are the pretty salmon coloured flowers in the pic above the potted hosta? They are so pretty. :)

And the bird in the photos is so cool. My compliments girl!!

Hello Freda girl ! .. With the heat and humidity we have been sweating through .. I am glad of the shady part of the garden .. it truly is cooler and calmer ? ;-)

OMG Cindee girl .. I have meant to e-mail to see how the cow mission went and if you got them out of your garden ! LOL
That happy dance is certainly from being over tired girl .. it has happened to me too !
Holy Smokes !! hey I would buy them too and find a place if I had to kick out other plants .. they are going to be gorgeous .. when I bought Fred I was totally in love with him : ) .. YES !! husband brought back that gorgeous gazing ball and stand (which is still in the house until I find the perfect spot) from Lowes in S.Carolina a few years ago .. he thought Lowes was fantastic : )
Dave's crack has been an issue for a couple of years now .. it seems to be getting BIGGER !! eeekkk !

Hello Theresa .. Thank you ! and you are right .. it is a lot of work but gardeners never really think of it as work .. it is a labor of love and the results can be awesome : )

Lisa girl this record breaking heat/humidity for May is forcing the jungle aspect to all gardens .. it is scary .. but then again there is always Halloween ? LOL

NS girl ! That was too funny : ) .. I think you have given me an excellent post idea with Pudder ! : ) .. I do run for refuge to the deck umbrella to take a break from the sun .. it has been unreal out there. Maybe it takes a few years for the SS in giant form to reach that height ?
I hate waiting for a plant to look the way I think it should .. I say HURRY UP !! haha

Hello there Rebecca girl and thank you : ) Lush is scary at times even though it is beautiful ? LOL
Those flowers are actually more orange .. it is a selection of Geum .. I think it is "Orange Geum 'x Borisii' there are red ones as well but this was my first and it is an older plant that was divided and still doing well : )

Grace girl thank you so much ! Have you read Barry's e-mail this morning .. he made me laugh about this heat wave we are having ;-) I am melting too .. My garden art obsession starts in February .. thankfully I have a friend who is slightly OBSESSED too, so I don't feel so guilty ? haha
Yup ! I felt like I was soaring a bit too when I watched the gull : )

Joy, your garden just looks beautiful! Your hard work has certainly paid off. Now, as I already offered Teza -- if you send us a little of your heat, I'll send you back some of our very cool air. Deal? (But you can keep the humidity!)

Nancy girl thank you !
This start to the season has been one of the most extreme ones I have seen here .. that start-stop-start again has driven a lot of the plants stark raving MAD !
I have been trying to keep things under control but wow .. it is a lot of work and in fact today I have to take off .. the back has sent some painful messages saying it is going to quit if I don't ? haha
.. Nope !! You have to take this crappy humidity with the HEAT .. there is no separating it girl ! LOL .. yuck !

Sounds like you're having the same kind of weather on your side of the lake that we are over on my side. Lots of heat and no rain. Thank goodness for the garden hose and the Lake Ontario water! I keep thinking I'll catch up with everything so I can just sit and enjoy the garden - ummm - does that ever happen??
Bonnie

Bonnie girl : ) This has been unreal with the heat at this time of year .. and that horrible humidity ? I say get lost humidity !! .. I hate that .. I sweat like a fountain when I am working in the garden .. and you are SO RIGHT ! when is it we sit back and truly just enjoy the garden ? I'm not complaining mind you (even though I have managed to wreck a disc in my back again .. jeez !) I love "working" in the garden for the most part .. but lets make a point of actually sitting down with a cool drink and enjoying it ? haha