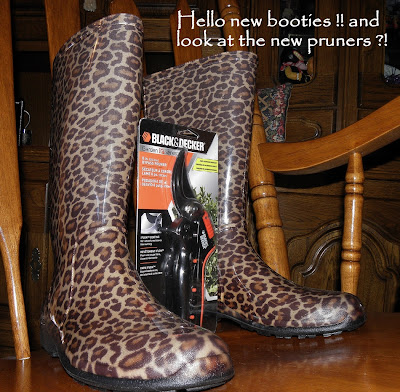 I bought these boots yesterday along with the pruners in oblivious bliss of breaking them in with no cares in the world but garden fun .. and happily ? made in CANADA .. not China or India or some "stan' country .. but good solid Canuck wear .. but I sway from my wordfull story of the day. 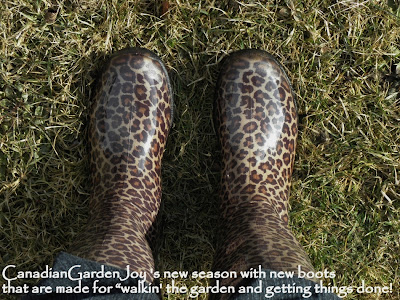 As I said .. after I stopped screaming .. I had a shower .. got dressed and put my new booties on to commune with my garden because the weather is totally awesome and I am taking as much as I can of it .. I needed to stop thinking of raccoons ! 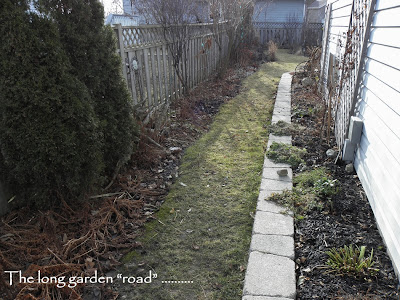 This was just a taste of the "clean-up-road" .. in actuality the tree company came (they were supposed to be here on Wednesday .. did they hear we had raccoons and felt bad for us?) .. so this is what the new space looks like minus the old Mountain Ash tree .. 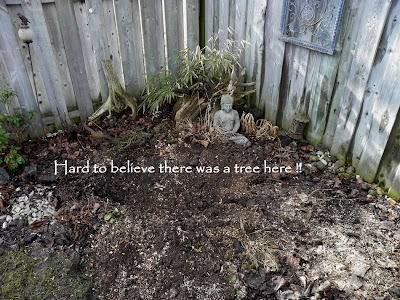 They came ... they "saw" ... and they conquered .. all so quickly I hardly had a chance to say good bye to the tree that is .. they also did the pollard on my Sumac for me ... bonus EH ? still trying not to think of the RACCOON problem ... 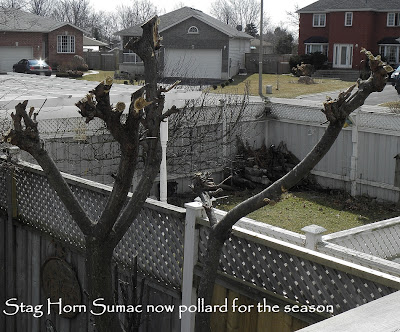 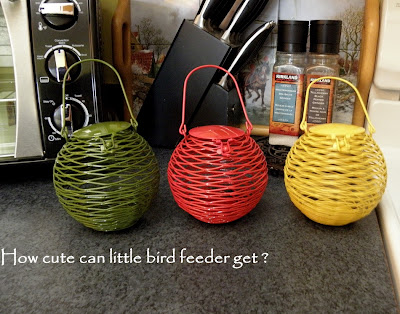 Oh no,I can't believe those dreaded racoons are back this year. They are very persistent. Love the new boots, just what I need. The weather has been gorgeous and I've been outside starting to tidy up the gardens. I hope this isn't just a teaser of what is to come, and that it stays around. I love those bird feeders, will have to look for them.

Raccoons??? Again? You are kidding me? I wonder if they mark in memory a territory and keep visiting it again and again? This is so weird (and frightening!). I'm so sorry, Joy. I hope this mess clears up pronto!

On the good news side, we are in sync girl! I spent a few hours outside today. It was much too beautiful to miss an opportunity to get out there and start cleaning up the garden. So many things have started to sprout that it's actually insane; it's so early. I also took some photos of the birds; a lot of them have returned from their winter vacation down south.

Oh, I love those boots! They are really funky. And those bird feeders? So cute. I gotta get me some of those with their pretty colours.

I love your bird feeder and may have to get a set for myself.
I feel your pain on the raccoons. We have given up on fish in out pond after loosing every single one to raccoons, they truly are evil. I must have been on bloggation during last years visitation, but I think I remember them in your roof the year before.
Best wishes, we are thinking of building a conservatory around our pond before we restock it again.

Linda girl I just felt like laying on the floor and crying .. poor husband dreaded telling me because he knew I would be that upset .. but what can you do ?
So Greenshield is taking car of the "problem" .. yes i wonder if this is just a teaser too .. but allergies are kicking in high gear, so I will have to get the meds and wear a mask while I clean the garden .. look in Veseys Linda for the bird feeders .. 3 for $19!

Martha girls I was going to drop a note off to you .. can you believe this is happening again to us ? YES .. that is what our raccoon man said too .. it must be one of the generation babies that is driven to get inside its past nursery .. what ever the case I have had more than enough .. and poor John having to tell me was his worst nightmare too! LOL
YES !! I worked way too hard so I wouldn't think of the raccoons but I am so sore today I can hardly move .. but it was good : ) so much more to do too though ..eeekk!
Boots are from WalMart, feeders from Veseys !!

Cat girl .. my heart dropped to my feet when poor John had to tell me .. and yes on the fish .. losing Ernie and Burt made me so angry .. I can imagine how you felt .. building an enclosure might just do it girl ! Good Luck and enjoy your wonderful garden !!

Hard to believe they can't fix the entrance that the coon use. Your new boots are great. Have fun pruning.

That's so not good, I hope that they can relocate the poor ******* yes just go ahead and guess the word I used.

After going through it each spring at the garden center, and smelly that stench above the till for all those months year after year....I sympathize. And I hear your anger.

Love the boots, want some eagerly.

And I was just joking about those being raccoon prints in the previous post. Never for the world thought they would return. But I think we have them in a tree here.

Girl I cannot believe you have those nasty Raccoons back again. They love your house. LOL! Glad you got in some garden therapy. And you are styling too in those leopard boots.

Lisa girl they did fix the obvious entrance .. cut a hole in our roof and the whole shebang (cost was scary too) but this little guy is one sneaky dude .. actually very hard to see how the hell he/she got in .. but they are working on it! I LOVE pruning girl ;-)

Thanks Lea girl it was a serious pruning cleaning up the garden day yesterday .. I am sore today but it was worth it !!

Jen girl I know you were joking: )who would guess some little so and so would find his way back into our attic .. this company will do a complete clean and deterrent spray .. they think it is one of the kits that was born here so the drive to return was that strong .. we never smelled anything or had any indication other than that familiar noise JEEZ !!
I used my new boots and pruners yesterday and I had a blast !!
Even though I am sore today I was so happy in the garden yesterday: ) Good luck with the neighboring raccoons (be very careful about food scraps !!!

Lona girl we are in frigging shock over this whole nasty raccoon farm here ! I was so happy to get some good hard garden therapy yesterday .. I am so sore today but lord I needed that therapy !!

Snazzy boots!
I just saw those colored feeders in a catalog two days ago. You must of gotten yours sooner.

Yup Sandy .. Veseys had the feeders on for some time .. but the boots are from WalMart and they work great !!