The Process of the Water Feature

We just had one day's warning that the landscaping company was coming the next day to install the water feature. That day being yesterday ... one of the hottest and most humid days we have been having of course!
The guys were troopers and worked very hard .. were super polite ... a great company to work with.
We were just a small job ... they work on very large scale ones.
So we were happy to be able to have this done and so quickly.
Now .. on with the pictures !
Starting with the "ugh" space ! 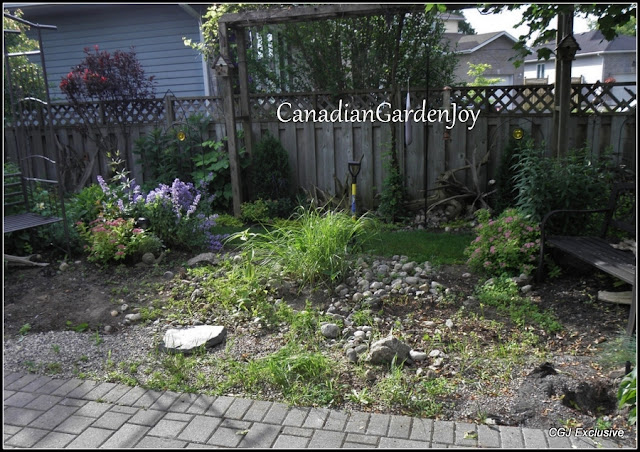 Exact measurements were taken over and over again to get it RIGHT ! 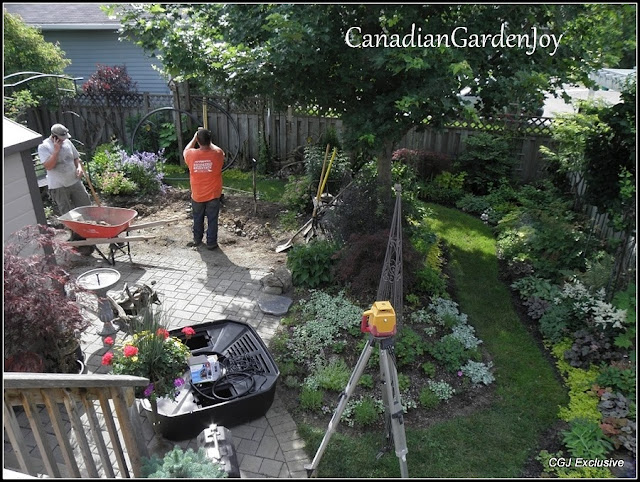 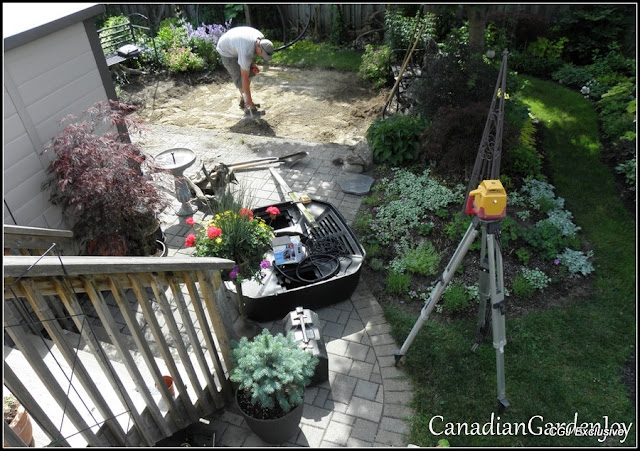 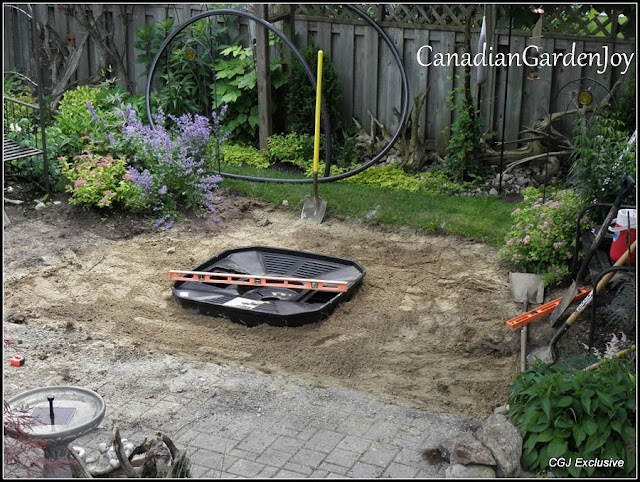 They laid down compost which would be under the landscaping fabric so when I decide to plant anything there would be some nutrients in the sandy soil. 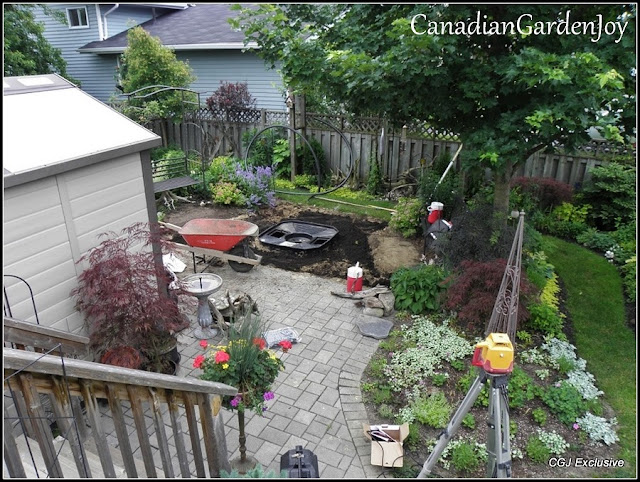 Next was the black mulch ... after planting my Japanese Maple 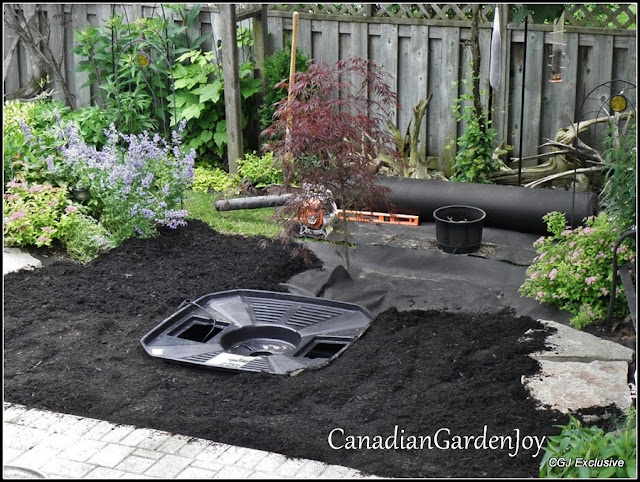 Test drive of the fountain .. this is a natural basalt column 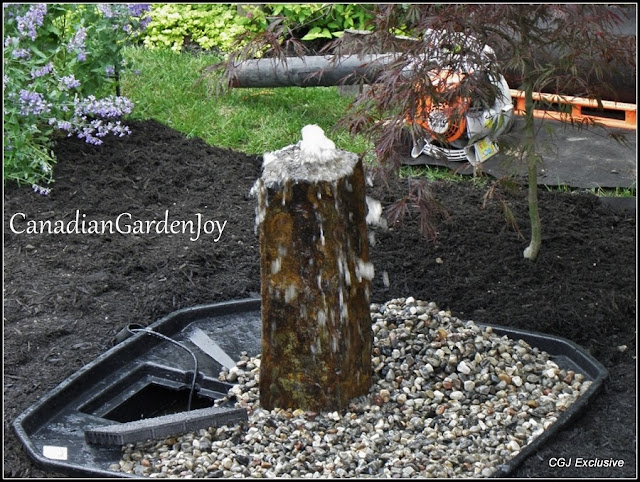 When the guys finished .. John and I decided to lay down the gray flagstone slabs we had on hand the last two years (one of those projects that didn't get done type thing)
I liked the "Zen" feeling they gave the space .. and of course my driftwood ! 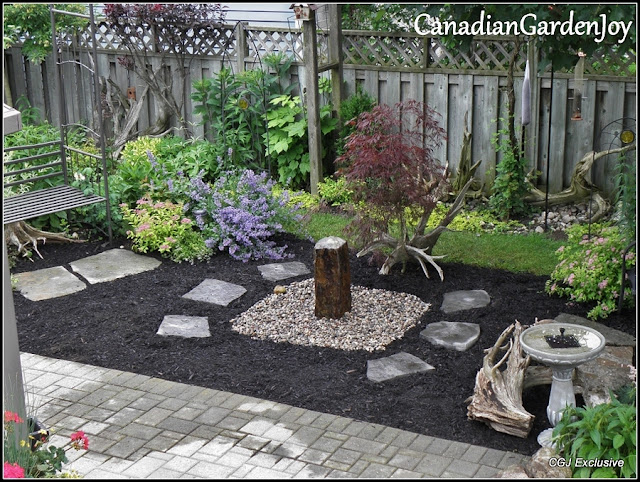 The company laid two large slabs under the footing area of each bench which gave it a nicely finished touch. 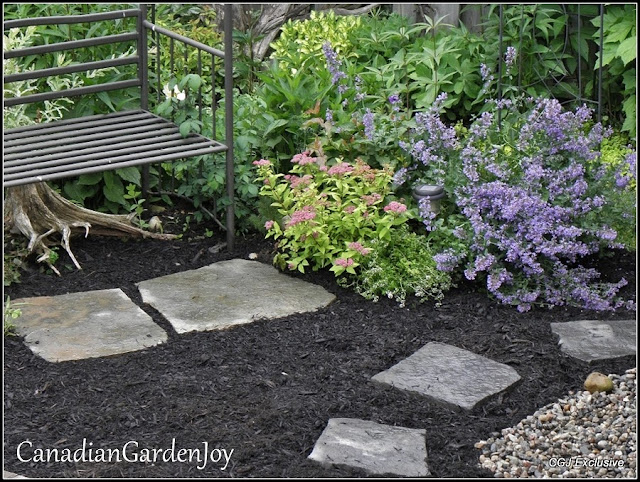 There are more touches to be added .. some larger rocks to make it look a little more natural .. a few plants.
I don't want to overwhelm the area though .. I want more of a "Zen" look which is uncluttered really.
So over time I will try out a few plants .. a few touches here and there to see what looks best. 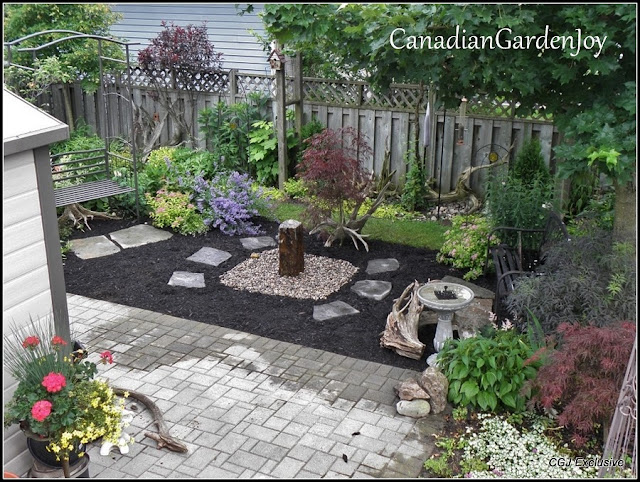 So now this project is done ... we have a wonderful background sound of water which is so relaxing.
The birds and beneficial insects (we saw a little dragonfly already!) are happy .. and we can't stop looking at the space because it is just so pretty.
A project doesn't have to be on a large scale to make a huge impact .. this gem has made us both very happy and certainly draws us in even more to the calm relaxing atmosphere it rewards us with !
Posted by CanadianGardenJoy at Friday, June 28, 2013

Joy, that is beautiful! What a wonderful spot to sit and relax in, read a book, meditate, listen to the sounds of the birds, the wind... Your garden is your personal paradise, and we all need a little of that. I know you will enjoy it. Just remember to take a break once in awhile from all the garden work and sit down and enjoy the results! Sometimes we don't know how to stop and just relax!

Looks awesome I love it ! I bet your glad that's over now and can enjoy your pretty space ! It has been humid here to but torrential rains since yesterday with T-storms . Thanks for sharing . Have a good day !

Oh WOW! What a statement that water feature makes. I love it Joy! Enjoy the sound as you relax in the garden.

Hello again Martha girl !
How true is that as we talked about!
That was too funny seeing you there girl : ) .. and yes .. actually stopping and enjoying the garden is so hard .. I have to be puttering all the time! haha
We love the sound of water there now .. it really is a wonderful part of the garden !!

Elaine girl hello! Yes!! having it finally done so I can play with it is wonderful .. and what about all this rain ? tomorrow is supposed to be better though .. which means I have work to get done in the garden! LOL

Lona girl hello there : ) it really is so much about the sound of water, it makes such an impact on relaxing in the garden .. we are loving it!!!

It is beautiful just like you imagined it would be. I can hear the water trickling over the rock too(-: You will enjoy it so much!!!

Wow Joy, that is marvelous! Definitely Zen-like! It feels wonderful when you get something accomplished that you have been "dreaming" of! Hot and humid here too, makes it difficult to get anything done! Cheers~

Your water feature looks so beautiful and calming. What a pretty spot to relax in.
What do you have to do to it in the winter time?

Joy it's simply stunning...I can almost hear the water trickling...I am so happy that you decided to go with it..what a beautiful thing to install.

I want one...lol...but have the feeling that it won't do well with all the debris from the fir trees...meanwhile I will live vicariously through your amazing shots of the process.

Joy' it was your great desire and the it's come true!
Nice place to sit and reading or thinking or watching at water or ...
Have a nice weekend near your new fountain!

It's so pretty!!!!! You all did a great job of envisioning and implementing that spot!! The foundation looks great!

This is gorgeous! Perfect for the spot and I love what you've done around it! May it bring you joy for many years to come!

Cindee girl hello there : )
Thank you so much ! It is amazing what the sound of water can do for your state of mind .. even my nutty one while working in the garden .. I have to remember to enjoy this and sit still for few minutes to do exactly that!

Heather I so hate that hot humid weather too .. this is amazing though, even when I am working (way too hard and too long ) in the garden the sound is so soothing .. I do love it !

Hello Balisha .. it is a wonderful part of my back garden indeed! .. in the winter we just lift the pump out and store it .. otherwise it is fine and good to go for our Canadian winters ;-)

Jen girl you are too funny .. OK, you can live vicariously through my enjoyment ! and girl I so enjoy this feature in the garden .. it really is amazing what the sound of water can do for you!

Nadezda girl thank you so much .. funny, I can never sit still in the garden .. I always have to be doing something but that is OK .. I hear the water and it is lovely !!

Linda girl : ) it was quite a process and it will be changing here and there as I figure out plants to go "here and there" haha
It is a real treat to have this in the garden .. John is loving it too!

Hello there Outlaw : ).. yes I hope we have many years of enjoying this wonderful water feature .. so many years I said it would be too expensive or too much bother .. but it is worth everything penny and what little work we have to do!!

I keep thinking that I need a bubbler in my garden, but I'm not quite sure where. Yours is great!

Hi Sweetie, What a great project and the outcome is so cool. Nice going. I love it. I have a feeling it will slowly fill with plants. :)

Thanks Robin .... we thought about it back and forth , literally for YEARS!
So I understand the time it takes to make a final "go with it!" LOL

Oh Joy--it is fabulous...in every way! I love the water feature...it's beautiful. Adding your driftwood really makes it! And I love how you've added the stepping stones...It's so nice to hear water in your back yard and it really does bring in the pollinators, birds and other critters that make it more 'natural'. I'm happy for you :)

something a little like that, is what we plan for the new garden. How wonderful to have a team come in, do it and it's done! A different sort of pleasure to nibbling away at the task bit by bit over time.

Jan girl thank you so much !
I have driftwood all over the garden .. this is just a small piece but does the trick .. and yes we think all the little life forms get excited when the bubbler is on .. the sound is wonderful : )

Hello Diana .. we couldn't do this on our own .. so having a company come in and do it was our only option and it was done in one day so we could enjoy it so quickly .. well worth it !

Hello Cat girl and thank you .. the company was great .. the lads worked all day and it was wonderful to watch it evolve : )