Blue Angel Clematis in any garden!

It is very hard to center on one plant right now ... the garden is popping with astilbe, roses, and loads of different foliage. The coneflowers trying to burst open .. although strange things going on with them.
Their petals are looking utterly scraggly on some .. perhaps the lack of sunshine ?
This has to be the most gray summer we have ever had.

In any case .. Blue Angel clematis has been amazing.
Especially since I transplanted the poor thing twice.
It is a wonder it flowers for me at all !
Once I found the right home .. a bit crowded with Ilse Khron Superior climbing rose .. but they seem happy to share.
Bottom right .. looks like they are coming from the rose foliage but their foliage is the light green to the left. 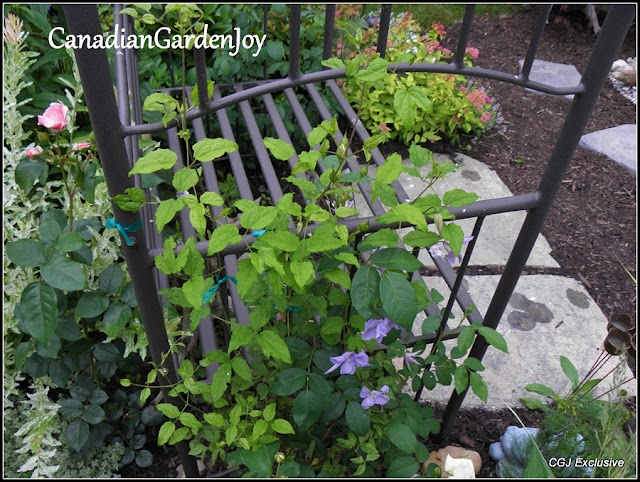 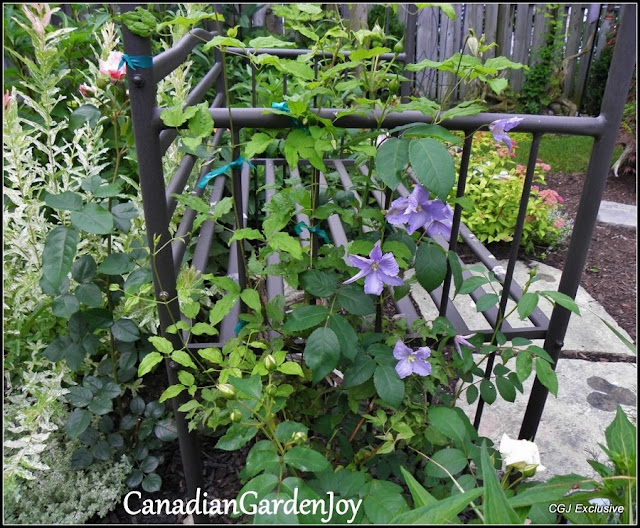 This was one of Canning's plants and it certainly took some abuse from my indecision of where it should go. 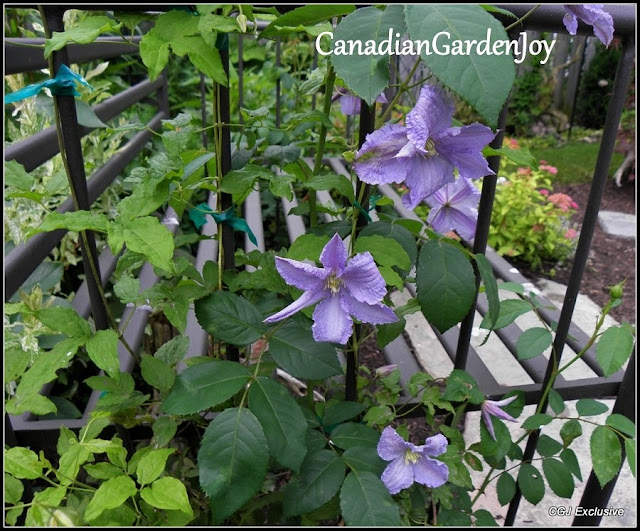 Now for a note of interest for anyone collecting lavenders .. one of the newer ones I found  called
Blue Cushion has been amazing .. it pumps out the flower wands like crazy but stays in a tight mounding form that is neat and tidy .. this isn't the best picture but it gives you an idea.
The cut wands dry to a nice dark bud for using in sachets or even added for drinks and cooking with. 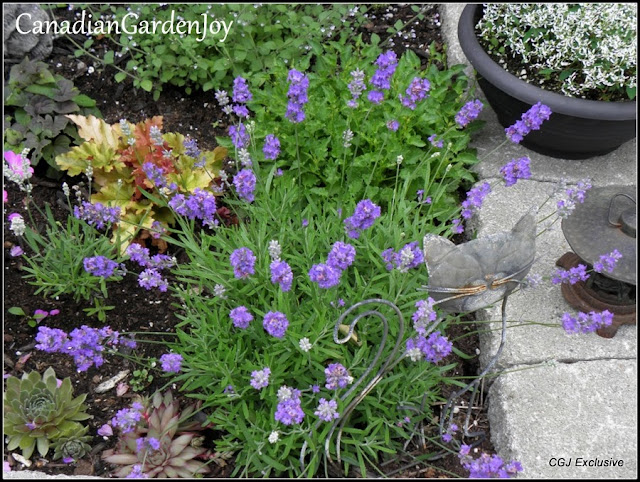 One more plant that pops .. a yarrow called Strawberry Seduction
I lost my butterfly magnet of a milk weed last year and in my rush I thought this plant might help out .. which if I saw any butterflies I am sure they would be seduced by it too ! ..
For some reason, maybe because of all the gray days we have had .. we have not seen butterflies ..
I have planted dill and fennel all over the place but I have little hope of capturing the wonder bug for another catch and release episode over winter.
In any case here is Strawberry Seduction ! 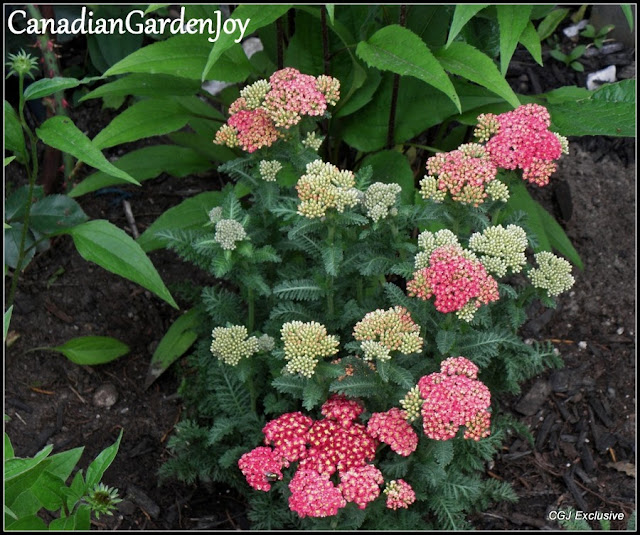 A picture of a tiny life force that can't help announcing itself in the garden caught my attention too ! 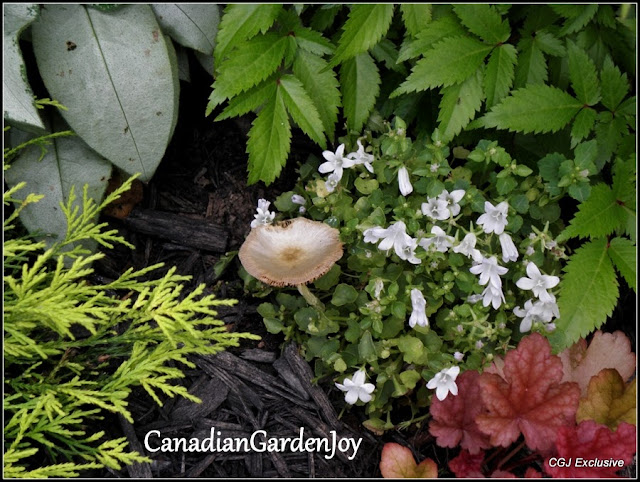 How can that not make you smile ?
Posted by CanadianGardenJoy at Thursday, July 04, 2013

Oh Joy! I love all of those plants. And they do fairly well in shade? I'm always looking for plants that only need some sun. I'm not sure which one I like the best. For a minute it was the yarrow, then it was the pretty little purple spiky plant. I'm torn between the two! And of course, the clematis is gorgeous! We are really being drenched here in Georgia this week. We've already had 4 inches of rain, and they are calling for that much more today! I need a boat!

Oh, I'm smiling, Joy. Beautiful! Is that a 'Georgia Peach' Heuchera I spy? They're one of my new plants this year.

Joy, now you have a mushroom in your garden!
Blue Angel is beautiful, let it fly to my garden!

Looks very nice. The only significant color I have in my garden right now is orange from the daylilies, but there is a lot of it!

I especially like the crazy cottage look. I have it too. It saves on weeding. My purple clematis has two New Dawn climbing roses planted behind it on another trellis. I think that they will be pretty together.I really have enjoyed looking at your flowers.
Balisha

Just beautiful! I love that rose/clematis combo. I have all sorts of strange mushrooms popping up all over too... it's just so wet out there. They are fun to look at.

Joy, every year I have dill (this year by the bucketload) but the butterflies never seem to pay it much mind. I find flat leaf parsley though is covered in butterfly larvae. My parsley is just a few inches tall right now and the leaves have all been decimated already. I know some people have good luck with curly parsley too. maybe next year?

my coneflowers seem to be suffering a similar issue? scraggly leaves, a light green, like something is a bit off but I don't know what?

Hello Leslie girl : )
This is the sun patch part of my garden .. clematis does need it's bottom part shaded though which it has here with the other plants.
We have gray skies but NO rain .. can I borrow some of yours ? haha

Carolyn girl .. that was a lovely post and congratulations again with your son's marriage .. it must have been a beautiful reception in your garden! I do have Georgia Peach but in another part of the garden ;-)

Nadezda girl I would send some of my Blue Angel to you if I could: )
Yes mushrooms are funny little creatures are't they?

RP hello there .. I hope you are feeling well? Thank you : )
Day lilies pop with wonderful colour this time of year too .. I am sure your garden is looking pretty!

Balisha hello there .. yes, I have a crazy cottage look right now .. but I am reconsidering moving some plants around .. we gardeners are caught in perpetual movement? LOL
Yes I like having roses and clematis together .. I hope that my Zepherine and Miss Bateman will show off next year. Thanks for stopping by : )

Hello Spurge : ) Thank you so much!
The mushroom explosion isn't due to a lot of rain here since we haven't had much at all .. but gray skies almost every day. YES! roses and clematis together are pretty : )

Marguerite girl hello there : )
I didn't do the parsley thing other than some curly plant with the herb mixture I bought at Loblaws .. I think you are totally right about the flat leaf kind .. note for next year! .. Yes ! some cone flowers seem to be affected by something .. I think lack of sun here ? haha

I didn't know there was a smaller type of lavender. Good news! I haven't seen many butterflies this year either, but my huge butterfly bush had to go, so I blame that.

Hello Robin girl .. YES ! there are many different new cultivars of lavender and I highly recommend Blue Cushion ... it is beautiful and produces wands like crazy !

Beautiful! The clemmy is gorgeous and I must make a note to find 'Blue Cushion' since my lavenders always get bigger than I'd like.

Love the Yarrow too.