OK .. I really let loose this year for plants in my garden ... I went over the top and may regret it all down the road .. heck ! working as hard as I did on Saturday even with my sweetie's help almost did me in !
But .. I am a plant addict ... I might as well say it out loud and admit to it , right ?
So one last on "sale" order from Garden Import was for : 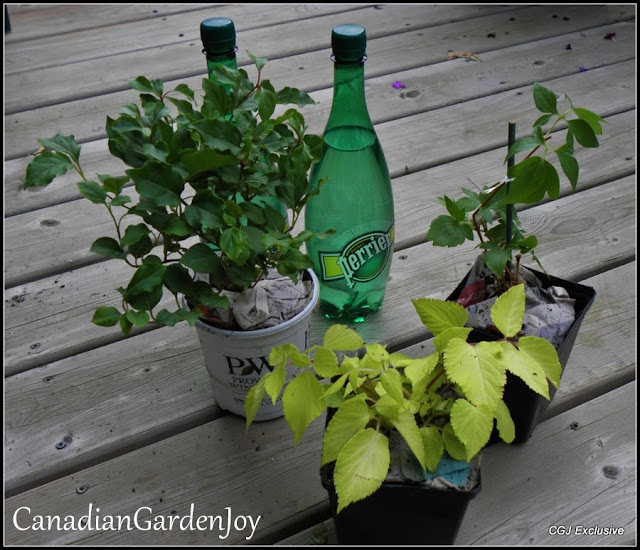 The perrier was for an experiment .. on getting rid of ants ... I haven't been back to check but apparently the carbonation is supposed to knock them for a loop .. I don't care about them in the garden .. you can't get rid of them there and they aren't destructive .. but the patio bricks take a beating from them when they tunnel around them all the time .. so it was worth a try ?

Garden Import doesn't have huge plants like Canning .. but they were in good shape and I have had plants from them before without mishap ... so I thought I would give it a go since I have been focused on these three for a while .. I never just say "hey I will get this plant!" out of the blue .. I think about it for a long time .. days .. weeks .. months even.
Sun King was for a shock of chartreuse in a shady area ... the Huldine is a white clematis to show off companion plants .. and the little lilac is for out front in the Spring .. a shot of pink with some fragrance!
I have to compile my mail order reviews and post them on the top pages ...
But I thought I would give this one a shot on a post for now ... even at this late date !
However ? I have three plants coming from Connon especially for around the water feature ... so I will post about them when they arrive !
Posted by CanadianGardenJoy at Sunday, July 07, 2013

Glad to know I'm not the only one still getting plants in the mail:) Love that chartreuse foliage!

I'll have to check out the tip on carbonated water for getting rid of ants. They seem to be prolific around here this year. I don't mind them in the garden, but I've disturbed a few anthills while weeding, and wound up furiously brushing ants off my clothes and arms--those little guys can bite!

I am not as restrained as you Joy. I do make impulsive purchases! I seriously eyed the Sun King in the GardenImports catalogue and will be curious to hear how it performs.
I had to scroll down to see the new water feature. It looks great!! It will be nice to have the sound of it splashing away.
Can you believe this rain and humidity? The garden looked like an Amazonian rainforest this morning complete with mist, oversized mosquitoes and jungle-like growth! I am going to have to cut back some plants just to make it to the front door!! I never thought I would say this but rain, rain go away!!

I think by now you have me beat on the number of plants purchased and planted this year. And it is only early summer :)
I am curious about the aralia. You will have to post an update on it later this year. Happy gardening.

Joy, your new water feature is wonderful and I think the new plants will go well there.
Have a nice week!

They might not be big but they sure look healthy. always happy to see your reviews Joy. The plants I got from Canning last year are all in great shape. When I'm ready to do a big plant up again I'll be ordering from them.

Joy:
You will LOVE the Aralia... I have no less than four of them squeezed into my postage stamp sized property. Trick? Lots of room to grow and lots of water which has been rather easy this year! I have had to prune two of them back already as they were crowding out other 'special' kids in the garden.... you know the ones!! LOL!!

Hello Rose girl : )
Yes .. I have a feeling more dribs and drabs will float in as the season goes on .. how can we help ourselves?
I'm not sure about the carbonation trick yet but will give it a try .. I can't stand ants on the deck or the patio but in the garden , you just can't help that !

Jennifer girl .. I do make impulsive purchases too .. I admit it! haha I'll let you know as the season goes on about Sun King.
We love the sound of splashing water : ) This weather has been so strange for the year .. I wonder what Autumn will bring ? who knows!

Patty girl hello there!
Yes .. I went over board this year .. next year will be more restrained no doubt!! .. I will post about the aralia so you will know how it does !

Nadezda girl hello there: )
Thank you so much : ) I think it makes the garden happy too! : )

Marguerite you are so right .. and I know when you are ready for that order Canning will not disappoint!

Sweetie .. I can't believe you have FOUR??? holy crap!! .. I am wondering about my one .. and where it will go eventually for room .. I have a feeling it will always be pruned rather severely, but it will have that flash of chartreuse to brighten up where ever it is!

Your 'Sun King' aralia looks almost identical to a yellow-foliaged Cistus I found last week. (Can't recall the name right now.) I don't think cistus are hardy in your climate so that aralia will be perfect. I love it. From one plant addict to another, keep 'em coming. :)