BIG Trouble .. a contract is out on me.

I normally don't try to whine about past troubles ... well, OK maybe a little.
BUT ... this morning ? it all came rushing back to me and sent a chill up my spine like nothing I have felt for ages ... (can't remember the last really scary movie I watched .. ugh !)
So what turned my morning into paranoia and a sense of ice cold fear ?
THIS 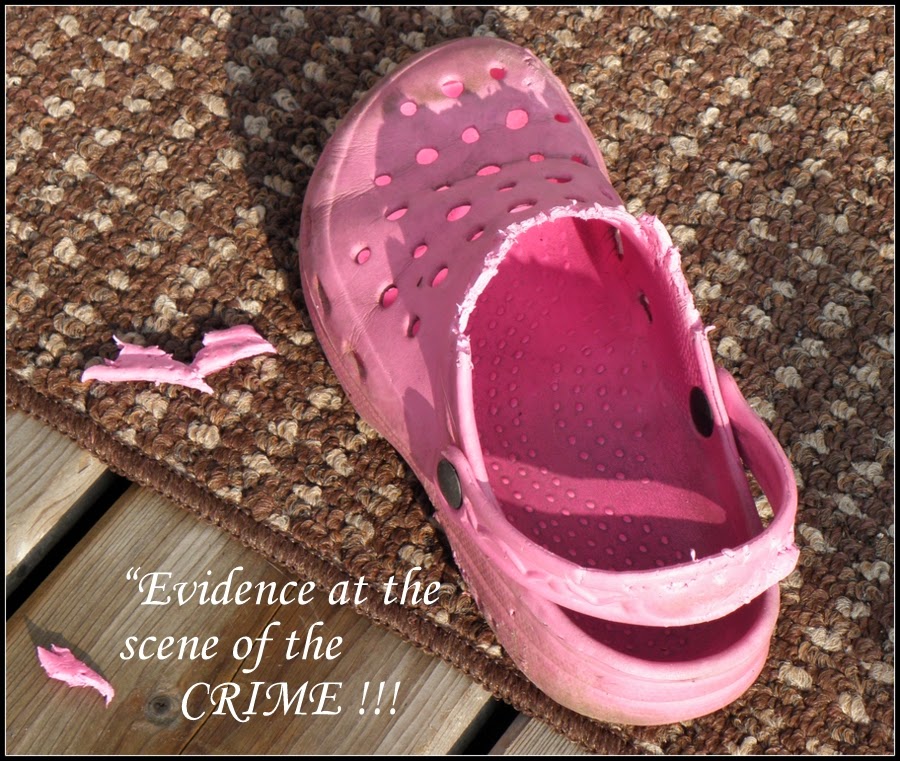 My most favorite, well "loved", garden shoes .. it doesn't matter if they were only $6 ..
They WERE well loved!
Just so you get the full atmosphere of the intended attack on my sense of well being, second shot. 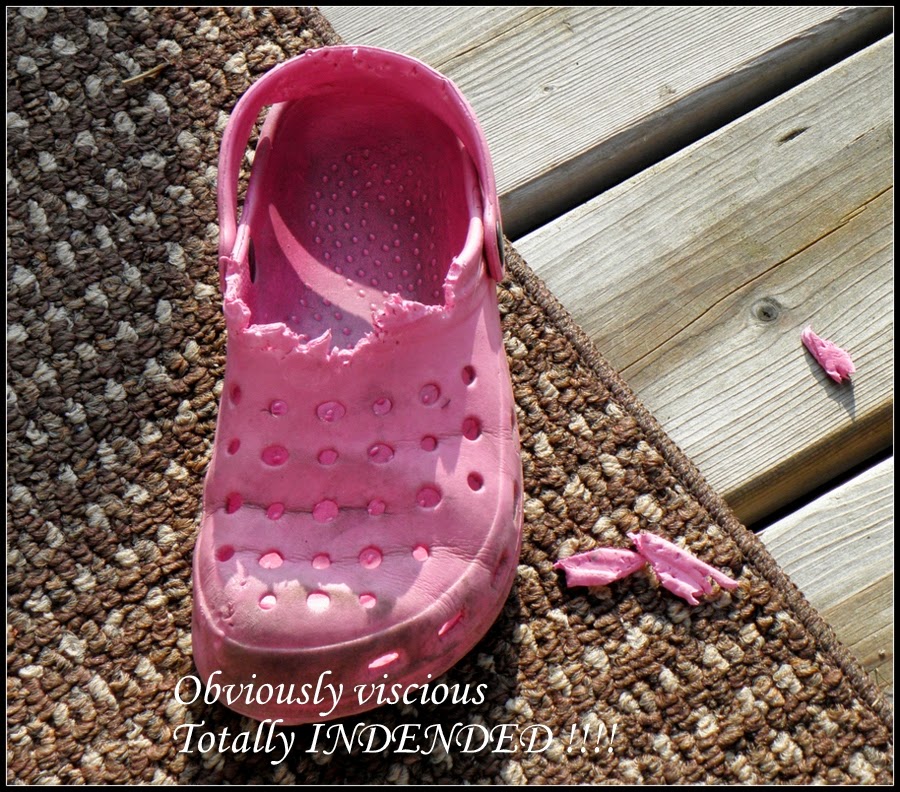 So "who" am I in total, unhealthy fear of, after seeing the scene of the crime on such a pretty, but now
UN-carefree morning? 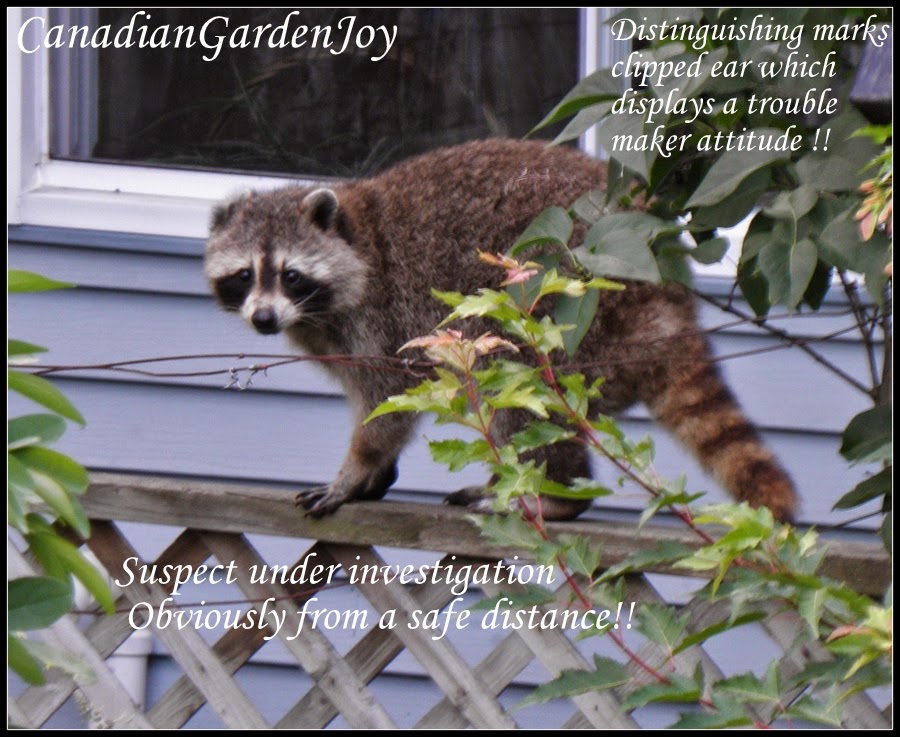 On the 18th of July,two BIG black eyed bandits were strolling my back garden .. like some kind of inspection team casing the joint for further attempted "raids" .. for which there is nothing of the "food" type nature to snack on .. that mere fact could have aggravated them ?
I do have to add they did not destroy anything in the garden .. but the new fence is much too tall for them to climb .. this is the neighbor's fence.
A point of great agitation to them since this was even difficult to "haul" their collective butts up and over. 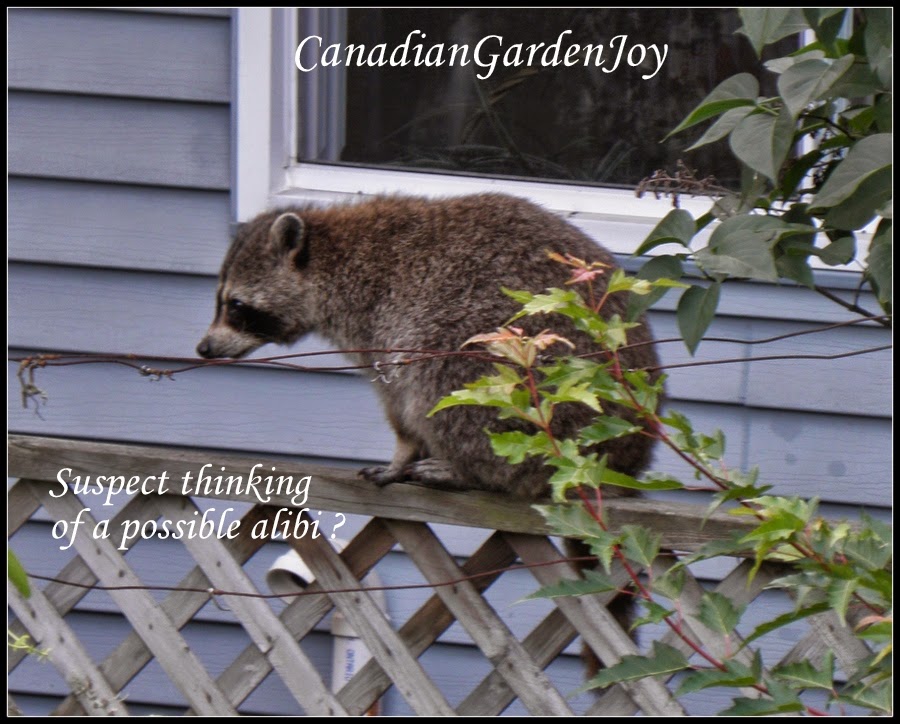 I can't begin to describe the cold calculated stare this particular suspect gave me when I "told" them to get out of my yard .. another set of chills u[ my spine ... brrrrrr !
Why do I think I am under contract with the raccoon mafia ?
Look 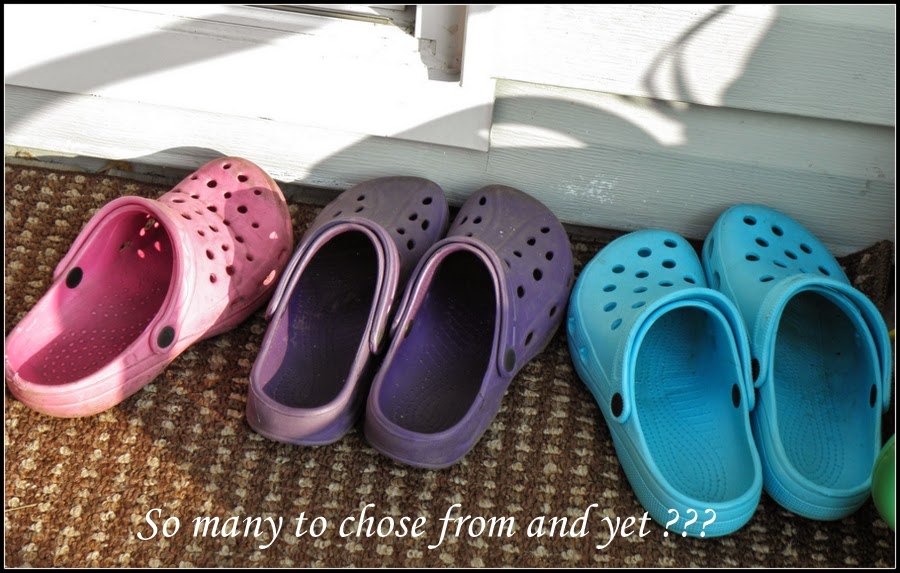 We have even more than these garden shoes tucked away on the deck .. and yet ?
It was my beloved ones that were mauled ... a definite very SERIOUS message is being sent to me.
I may have to go under ground for a while until they forget about that morning I yelled at them.
Possibly a witness protection program of some kind ... I just know I'm a marked gardener !
Past history with raccoon mafia :
Previously, a few years ago, we had a raccoon "Bed & Breakfast" going in our attic unbeknownst to us.
Even with professionals working on the situation, it went on for THREE years!! until everything possible was secured and sealed .. the fact they can't set up housekeeping again may also contribute to the campaign against me ... see ? total PARANOIA has set in .. their plan is working!
Posted by CanadianGardenJoy at Tuesday, July 29, 2014

Yikes! I'm frightened for you! You shouldn't have crossed the "family!" If we don't hear from you again, it was nice knowing you. Maybe you should get yourself to a safer place and soon!

I bet they are part of the same gang that tears the stuff in my green bin to shreds! There cheeky little beggars too. One night we rolled into the driveway just after dusk and the headlights caught them redhanded. They couldn't even wait for cover of night to do their break and entering!

Dear Mr. TOG .. We could NOT believe the state of my garden shoe!!
That was a declaration of war I am sure!!
I will be watching my back constantly when in the garden .. they mean business !!

Jennifer girl .. they have lost any code of honor they might have had when they did this to my garden show .. I am surprised they didn't roll on the ground laughing at you guys when you rolled in!
Scary, rude creatures !!!

BAHAHAHA! Oh, Joy... If you disappear and there's a search for you, I'll point the police to this blog post. You even have a photo of the culprit. Or maybe I shouldn't even be commenting here? Maybe they'll come after me now! LOL...

What's up my Kingston friend? It's been a pretty cool summer, no? My flowers are loving it. The berries and tomatoes? Not so much.

Hey, are you going to find your way out of that garden and join me for a coffee, tear or whatever before this summer ends? I would love to meet up one morning. Just let me know when you're up to it.

I hope you're all doing well, girl. And watch your back! Raccoons mean business :)

UNBELIEVEABLE!!!! I am speechless!

Oh my cheeky buggers chewing your crocks . I have a pink and a beige pair but I got mine for a $2 at our dollar store . We have raccoons here to but Miggs sent in the yard keeps them at bay . A story . When Papa and I were camping years ago up north at night whilst we slept we were woken by something outside the tent well a raccoon had unzipped the door and came in and took some Ritz crackers the entire box and fled out the door again and it happened to be my cheese ones not Papa's plain boring ones guess the raccoon likes cheese flavor any who we went out side to look for him and he was in the woods right by the tent eating them quite happily I might add it was funny but scary to know that they are smart enough to be able to actually open a tent door zipper that was closed up and tight . Hope the little critters get the hint and move on for you ! Thanks for sharing . Have a good day !

Maybe they just don't like pink or perhaps the pink ones taste the best. After all, if they look like candy then maybe they taste like candy, too. I bet raccoon mama's tell their babies not to knock it til they try it. I think they were just taking their mom's advice.

Oh Joy, this post did make me laugh. Not funny for you of course, being stalked by these blighters, but those shoes ;-) . Must have been tasty, hey!

ha ha ! I thought initially you must have a new puppy when I saw the state of your beloved shoes but no ... racoons ! And I thought mice were bad !

Oh Joy I am sorry for your troubles (the ones with the masks) but you have cracked me up and I am still laughing. Sorry:):):) HUg B

Oh my goodness! lock away all valuables, they're back for revenge!!!

Dear Mr. TOG
Thank you for your empathy with my predicament! .. I am scouting some hiding places but you know how it is .. the word is out and no one wants to hide "trouble" from the family!

Jennifer girl there "family" reaches far and wide so a connection is a probability! .. Their "we don't care" attitude has become a standard trade mark .. BEWARE !!

Martha girl hello there .. I am whispering just in case they have "bugs" in my house! .. hey you have to help me if I disappear girl .. I will end up on your doorstep! haha
Back to reality .. yup ! great for the flowers and plants but not so great for the fruit and veg sorry to say.
YES ! got to get together for a girlie chat girl !!!
While I am still watching my back!

Hey there sweetie ... I was going to send an e-mail to you and Ian about it .. but still in slow motion mode? LOL

Elaine girl .. I might have to "borrow" Miggs ? haha ... and your account is VERY much their trade mark .. unzipping is a "snap" and of course! cheese flavor over plain EVERY time !! LOL

Tammy you could be on to something .. pink can look like candy .. but why me ? why not some one else in the neighborhood ? picking on me has a definite link to the shouting episode .. or am I paranoid yet again ??? YIKES !
Yes .. your comment was here .. no worries, I am just SLOW with this.. must be the paranoia ? LOL

Paula girl ... it sent a chill up my spine to see what they thought of me by way of my shoes .. a message has been sent !! LOL
You are doing a fantastic job with your garden girl .. love those stepping stones that are more revealed now!

Jane girl ... these raccoon are BIG .. imagine a huge cat with more attitude than you could possibly handle ? .. I am watching my back constantly now .. they have "spoken" !! haha

Grace girl .. glad to have made you laugh ... we did laugh too ... but then I began to wonder why they picked on ME ? eeeekkkkk!!

Carrie girl ... good heavens yes!! They are out for revenge no doubt in my mind .. the glove or should I say "shoe" has been thrown down .. the line in the sand is marked ... I am in deep doo doo ! LOL

Too funny! They always go for your favorite things - shoes, plants, etc!

Hello Leslie girl .. it is scary though .. so many shoes to pick from and hubby's too ... yet they go for my favorite ones .. they are after me!! LOL

They have your scent!! You are a marked womwn--old grudges die hard....ouch!!!

I was just looking through your posts and missed this one I guess. So funny that the raccoon chose that pair of shoes. Maybe she likes pink? Tried it on and was to big so thought she would size it down for herself?(-: They are cute though. I have a few here too and a skunk. The skunk thinks its a cat and likes to come help himself to the cat food every night. Jack is not happy he is hanging out here but so far no one has been sprayed(-: