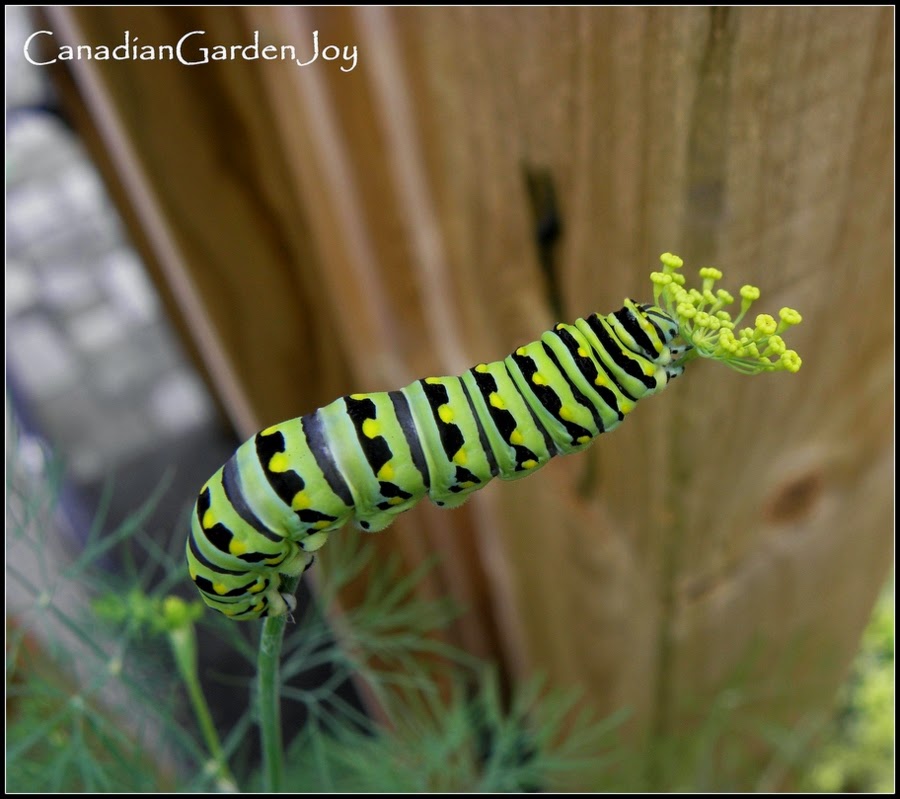 YES ........ this tiny jewel of a caterpillar is SO WANTED in my garden ..
I plant so many herbs and perennials plus annuals to draw in beautiful butterflies and yet the past garden year I saw none and had no amazing little guys chomping away to become jewels that flutter and fly.
But on with my story that happened between 2011 and 2012 ..... 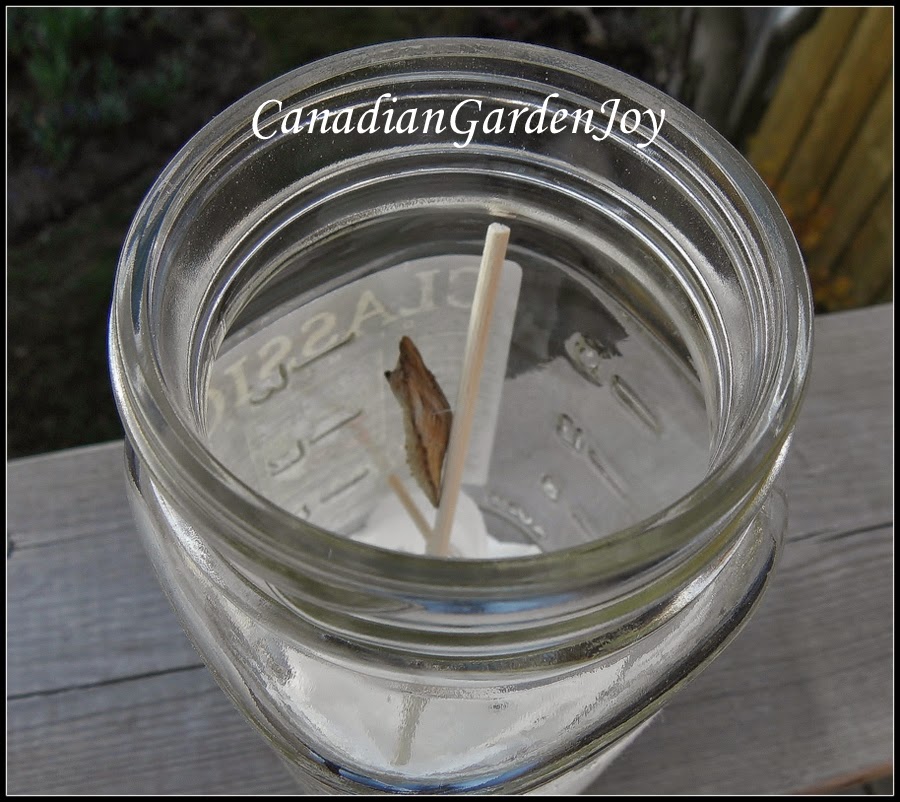 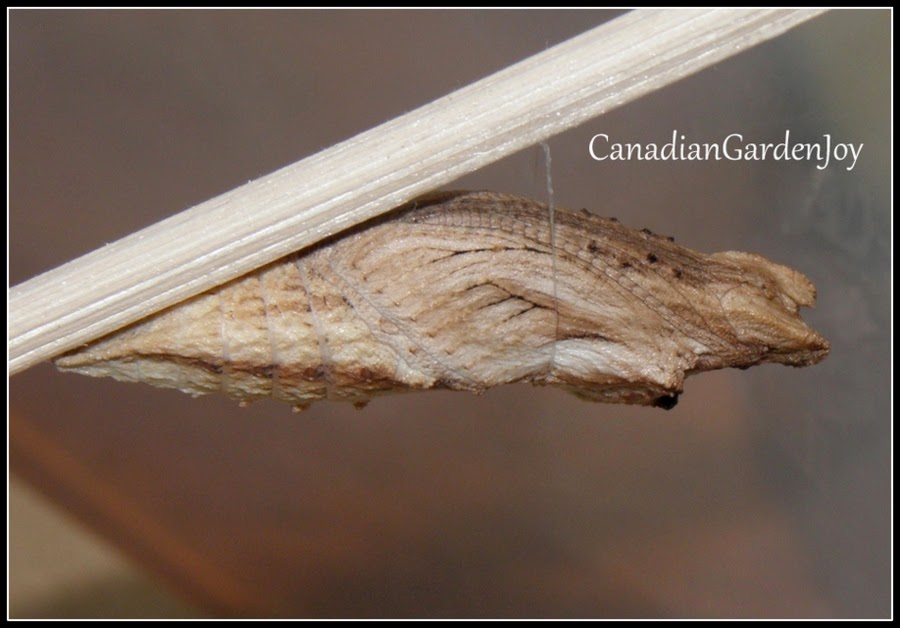 I had read that if you can keep a caterpillar happy and well fed into the Autumn it will make a chrysalis.
The next step was to have it in the right type of container to keep in your fridge over the winter.
It happened to be a spaghetti sauce glass bottle .. garlic might have been the stabilization factor ? haha
I moistened paper towel and made a lid of it ... I was leery this was going to work but I had to try. 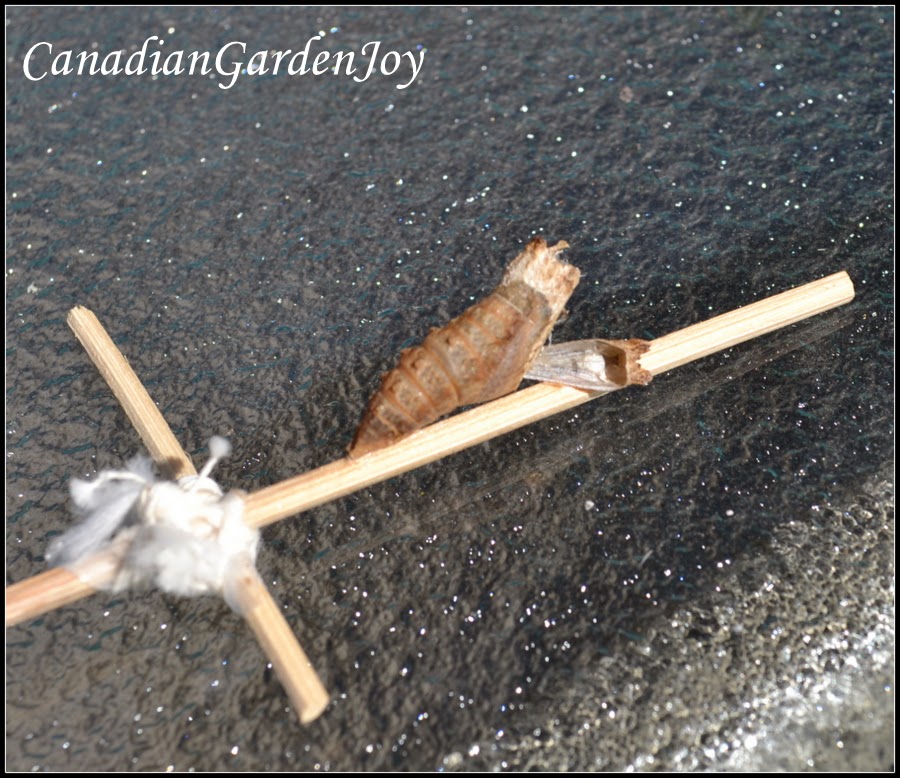 When the Spring weather started to become more stable I brought the bottle outside and placed it in a secure spot on our deck .. I didn't want any birds to make a snack of it or the squirrel from hell either !
We did not see the exact instant of time that it broke out of the shell, but number one son saw it trying to make it's way out of the jar. 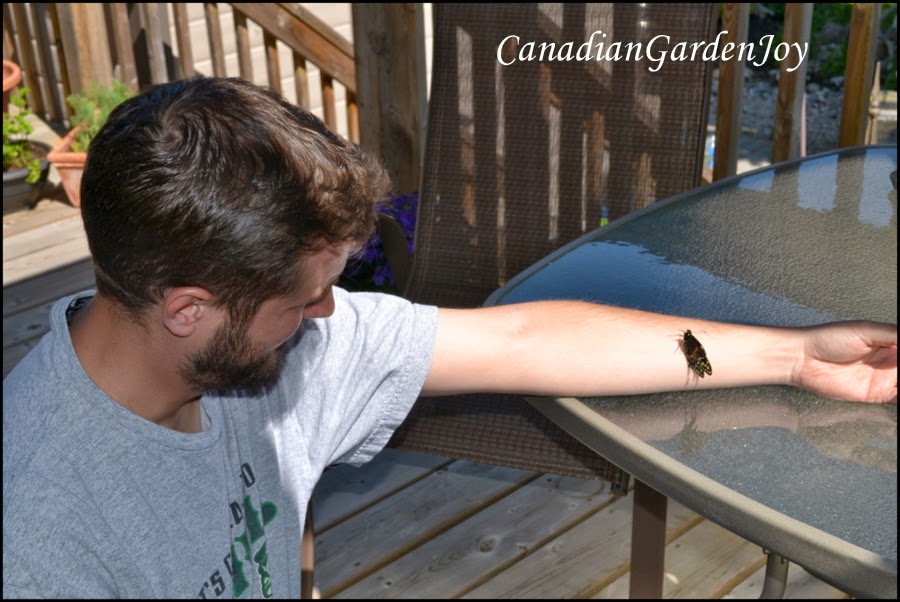 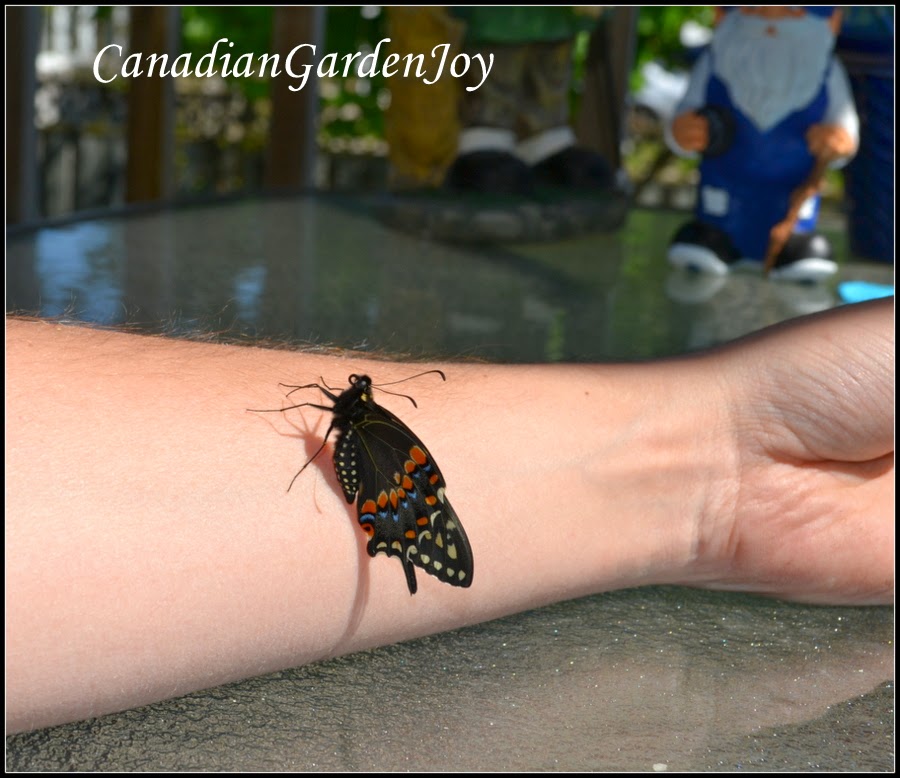 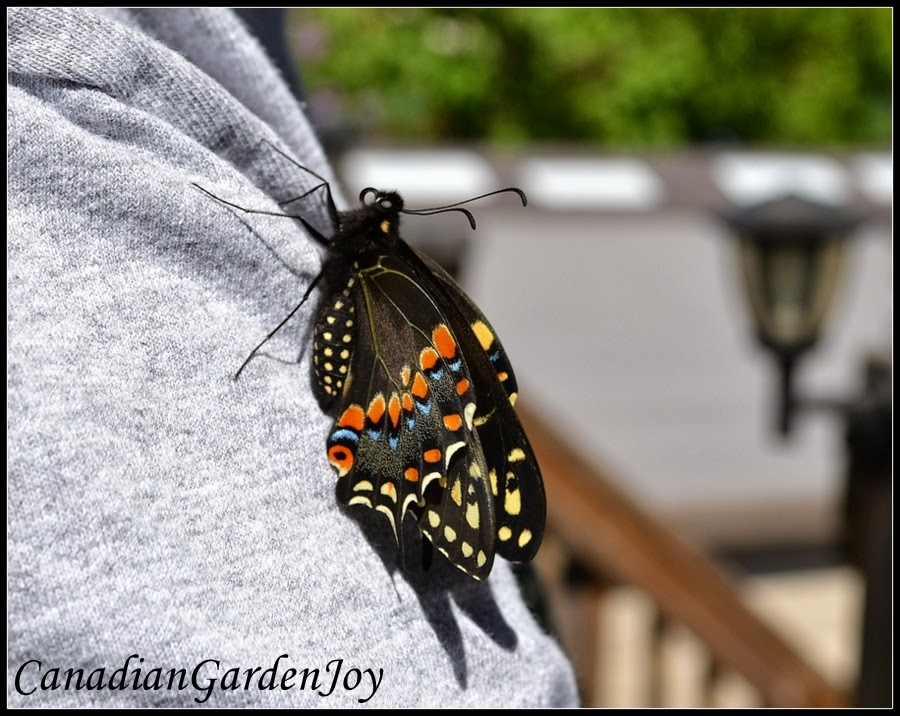 This was one of the most amazing moments I have ever seen ... I was not expecting this experiment to work quite frankly ... and it seemed to take forever when I placed the jar outside.
I worried that the fridge might not have been the right temperature, or a million other influences might have knocked this miracle back.

My old butterfly weed packed itself in last year .. and even though I had so many herbs and other perennials to attract butterflies, I saw none in the garden.
I always wondered if that was the "key" plant ... just this old fashioned orange "weed" 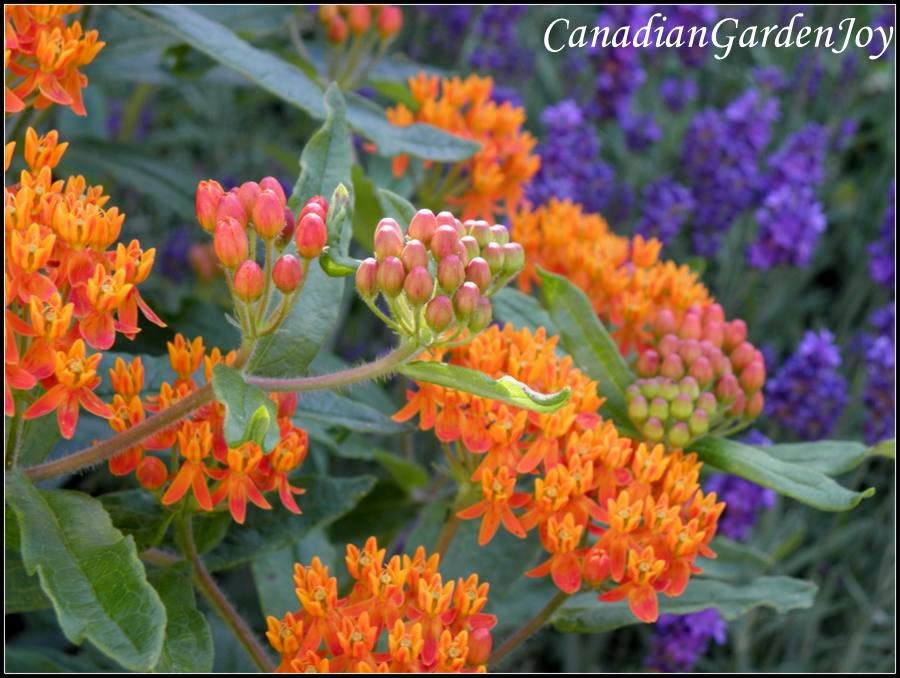 You can see the lavender as a companion plant to it's side.
So now I have 4 new "weeds" coming ... one is called Gay Butterflies which combines more colours within the main plant .. I haven't had that one before.
I also have another butterfly bush coming called "Buzz Ivory" to combine with my other two, Nanho Blue and Flutterby Grande Peach Cobbler. 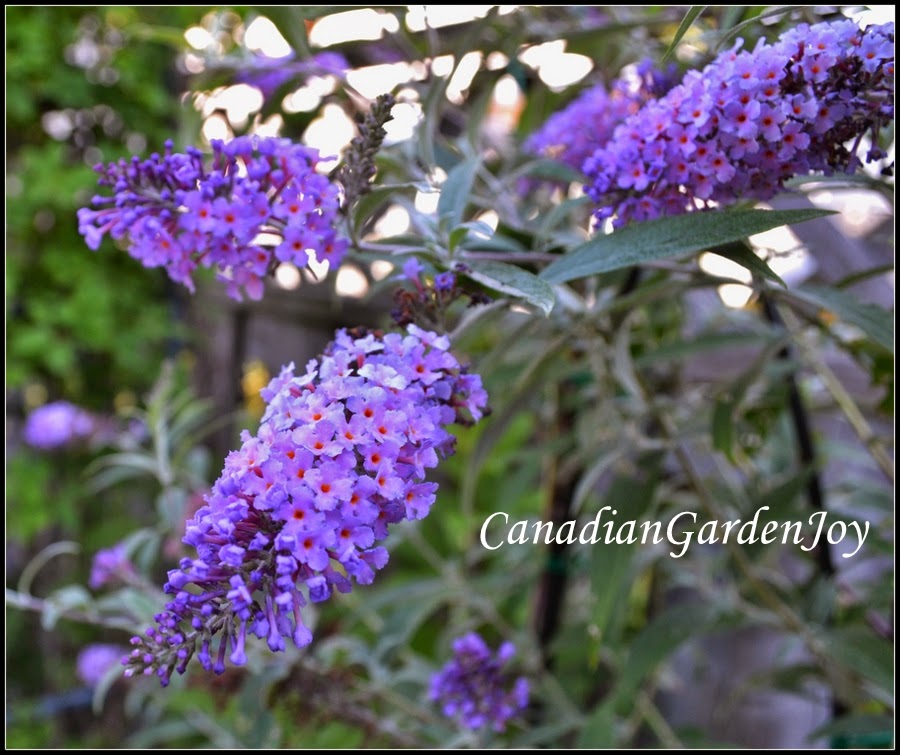 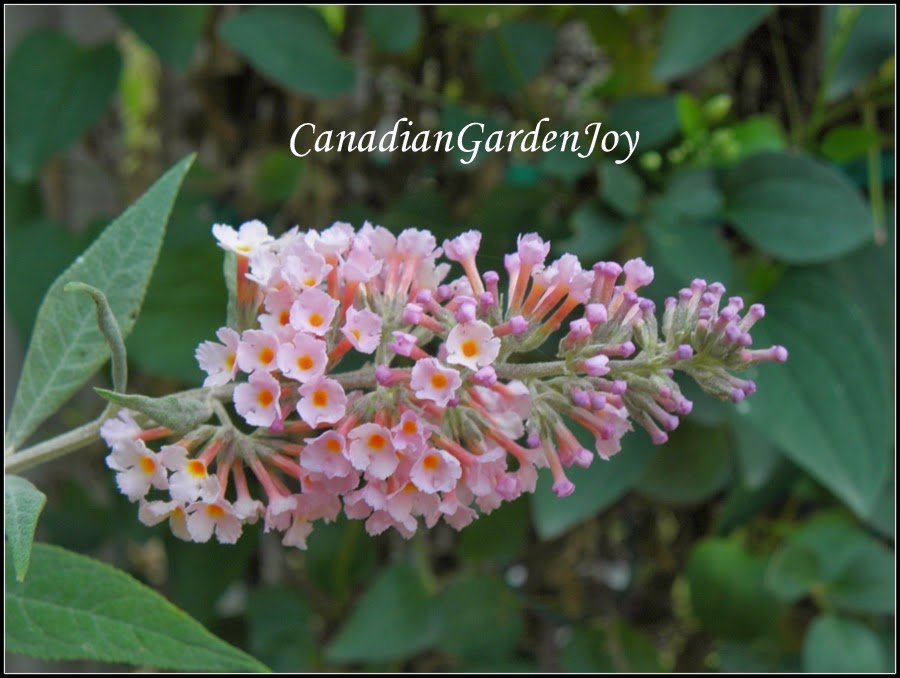 These plants take the longest to show "life" in the Spring.
I have learned that the hard way and dug out Black Knight by mistake.
I always wince when I think of that DUH? garden moment.
Hopefully this year I might draw in some beauties again and try this once more to see what an amazing miracle it is to bring a caterpillar to become a butterfly. 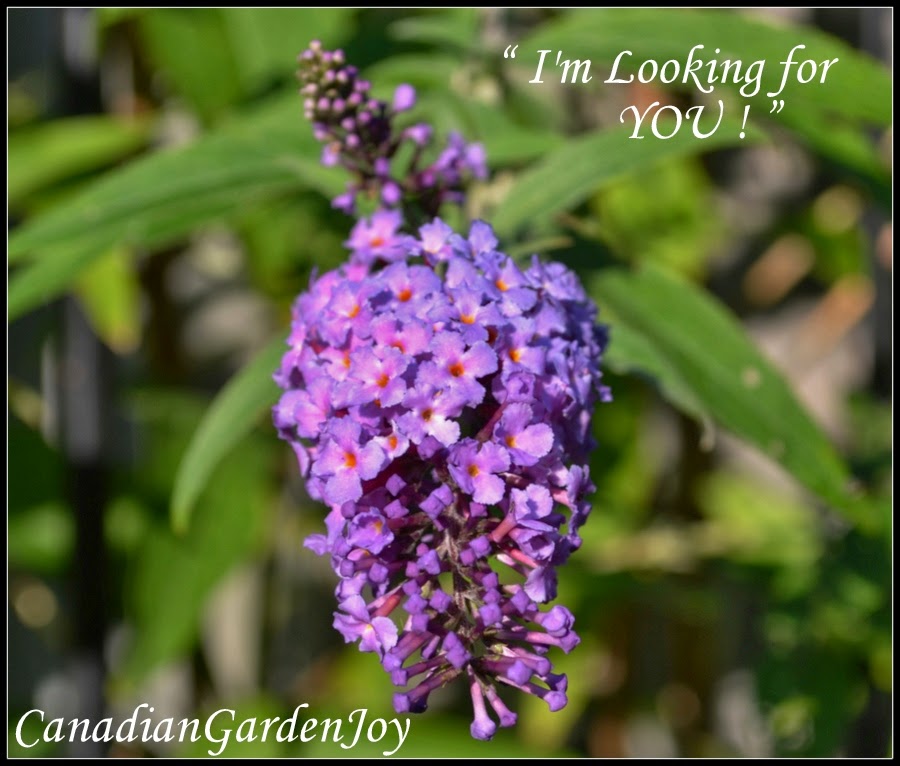 Posted by CanadianGardenJoy at Monday, March 31, 2014

A special miracle to see! At the school where I work, many teachers order chrysalises each year and sometimes I'm lucky enough to see the emergence of a butterfly. I wish you lots of butterflies this summer!

What a beauty you helped to one into the world! Gorgeous creature xx

I love seeing that sweet butterfly. What an amazing moment and miracle. I hope you have more butterflies and/or caterpillars this year. I'll keep my fingers crossed. Hope you're doing well my friend. Write when you can.

I am moved by this--you proud butterfly momma!

Your swallowtail is native to our area so we have lots. But there are many other butterflies that I rarely see. They also go nuts for zinnias, coneflowers, agastache, and need curly parsley and rue for their eggs. They also love smokey bronze fennel. I hope you have more this summer!

This is an amazing story Joy. I never would have though the butterfly would have survived over the winter in the fridge. What a glorious creature it turned out to be!
Last summer I had very few butterflies. I really hope this year will be better.
Can you believe that it's supposed to be going up to 12 degrees. Given our past winter and early spring that's practically a heat wave!

Hello there Mr. TOG !
It was the most brilliant event I have ever seen .. I was so excited it is a wonder the pictures came out. I was so set to do it again last year but not one caterpillar happened, it was rather sad. Fingers crossed for this year though!

Carrie girl hello there and yes ! I was so thrilled for this to work, I could barely believe it was happening .. such an amazing journey with it.

Hello Gracie girl : ) it was one of my best moments to remember .. if it never happens again I will always have this to look back on and feel that thrill all over again : )

Ms S : ) it truly was an exceptional event for us all. When I think of how many times I looked at that jar in the fridge and wondered "will this work??" and it DID !! LOL

Hello Casa : ) YES ! ... I do have a lot of parsley, fennel which I love .. and many of the perennial flowers they love to draw them in. I hope to have some babies this year for next year : )

Jennifer girl when I read "how to do it" I was leery too ... every time I open and closed the fridge I wondered if that motion would be too much for it with the vibration .. but if it was out in nature the wind and what not would stir it as well, so I just had to stop worrying about it and go with the flow .. we are in for heavy rainfall tonight... wash away more snow please!! LOL

I've never tried this experiment with keeping a caterpillar over the winter--how amazing to see the butterfly emerge in the spring! I always plant fennel and dill for the caterpillars, which they seem to love. But last year, even though I had lots of tiny babies at one point, they were all gone a few days later. I realized they had become snacks for the birds...the way of nature, I guess:( This year I'm trying to grow swamp milkweed to try to attract more Monarchs. I'm hoping to see more butterflies this year than last year. Can't wait to see your 'Gay Butterflies'--sounds so colorful!

Hello Rose girl and that was a nice post from the garden show .. a breath of Spring! My favorite was the water feature.
Gay Butterflies is a new one to me so I am curious about it too .. but I will be planting a lot of parsley, dill, fennel as well hoping to capture a baby to store over winter.
Fingers crossed !

Joy, your garden is so beautifully gorgeous what butterfly or caterpillar wouldn't want to live there....

Thanks Jen girl : )
I just hope I can get it to look good this year after such a LONG winter ! haha

Hopefully you will have butterflies all over your garden this year. You are giving them some great blooms to sip on. Have a great week and Easter.

I'm a butterfly geek myself, and this would have had me so excited! I once ordered Painted Lady butterfly larvae with a silly plastic house that was meant for children, and watched enthralled as they hatched! The tough winter took down all my butterfly weed, but more is on order. Love it!

Lona girl thank you : )
I hope you had a great Easter weekend too? ... we had fabulous weather so hubby and I were working in the garden to clean it up .. so tired now though .. but I can get on to other chores ? never ending once the season starts eh ? LOL

Robin girl it was such a thrill to see this evolve .. I would so love to do it again. Yes I have 3 butterfly weed on order to come and I am hoping to draw more in this yes .. fingers crossed !!